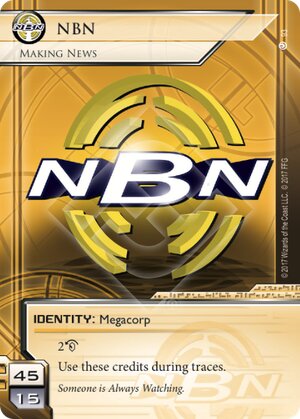 Someone is Always Watching.
Decklists with this card

(Breaker Bay era)
lynkfox 381
I don't think it is accurate to say TWiY took over from MN. Taxing trace ice like Caduceus and Viper helped MN defend their centrals. TWiY maybe replaced MN for 50% of players at its peak popularity? MN remained a strong choice for NBN FA ID until the absurd beast that is NEH arrived. — Ber 19 May 2015