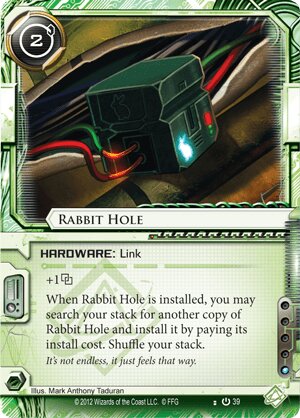 When Rabbit Hole is installed, you may search your stack for another copy of Rabbit Hole and install it by paying its install cost. Shuffle your stack.

It's not endless, it just feels that way.
Illustrated by Mark Anthony Taduran
Decklists with this card

Rabbit Hole: for when you absolutely, positively, need 3 right this second.

If you put in 3x Rabbit Hole (which is easy, even out-of-faction, due to the 1 influence cost) then you will find the first one quite early; you have about a 50% chance of seeing at least one in your first 9 cards (in a 45 card deck). Then, for 6 and one click to install, you should typically be able to pull them all from your deck at once, unless you got unlucky and have two in your opening hand.

This is the most efficient way to get three link in the game. Playing three Access to Globalsec costs you three cards, three clicks to install, and three credits, and that's assuming you can even find all three before the end of the game. Dyson Mem Chip is the same way, although you're getting some along the way. But that's still very, very slow, and if your gameplan relies on being linked to the max, it simply won't cut it.

But...why? Who on earth needs that much link strength?

For a long time, the answer was "pretty much nobody". A number of runners (Kate, Ed, Andy, and "Geist") start off with one link, and a single Dyson Mem Chip would put you in range to get free money from Underworld Contact and free MU from cloud breakers. On top of that, most decks didn't really run traces. You might see a few here and there, particularly in kill decks due to Midseason Replacements, SEA Source, or Punitive Counterstrike, but tracer ICE wasn't too popular. Notable exceptions to this were Data Raven and Ichi 1.0, but in both cases the trace was pretty secondary, and pretty weak anyway.

But Data and Destiny has two things which will change this up. The first is a huge boost to tracer ICE, in the form of the agenda Improved Tracers and the current Surveillance Sweep. With these two cards active, a lot of ignored ICE has the potential to become really dangerous; three of the four snake ICE (Viper, Caduceus, Uroboros) become really gross for someone without link, as do all the Zodiac ICE (Gemini, Taurus, Sagittarius, and Virgo). This meta shift might be enough to make link worthwhile on it's own.

The second D&D change is the introduction of Sunny Lebeau: Security Specialist, with her cards Security Nexus and Security Chip. These cards make link more valuable against any matchup--if you can efficiently beat a trace 5, you get a free Inside Job every turn, and the Chip gives your breakers the strength they need to chew through just about anything. Sunny starts off with two link, and the Nexus makes three; but to really capitalize on the Nexus and the Chip, you want as much link as you can get. Rabbit Hole fits that niche nicely.

(Old Hollywood era)
tiedyedvortex 4729
Hayley might like this as well if she runs Underworld Contacts since she can install another hardware afterwards! — Capstone 10 Sep 2015
Unlesss I understand something wrong Hayley can install up to three extra pieces of hardware by fully installign a rabbit hole. Never spend clicks installing cheap stuff like Stealth enablers, chips and cyberfeeders again! — tsuruki23 21 Sep 2015
Nope. Hayley's ability specifies "the first time each turn" — lmm 23 Dec 2015
Another thought: a string of Rabbit Hole up on the board early on provides fodder for Trade-In. — Damien Stark 12 Jan 2016
"50% chance to see it in your first 9 cards in a 45 card deck"...you play Andromeda, don't you? :V — LordRandomness 4 May 2016
2

Link, while better in this version of Netrunner than in the original, is still not a mechanic that is used very much. With Breaker Bay there are the Cloud type breakers that are starting to come into the pool, which may give Rabbit Hole some new life.

The main advantage of Rabbit Hole is the ability to thin it out of the deck as soon as one is drawn. This ability is seen to greater use on Paige Piper, and has been used to great effect even in the small time that she has been released.

Rabbit hole does that a little bit, but only for itself. If a deck relies on Cloud breakers and Underworld Contact the ability to jump from zero to three Link in a single action could be useful, while removing cards from the deck that won’t be needed later - So far all Link dependent cards only require two link.

Unfortunately there is also Dyson Mem Chip which gives one link and one MU - making it much more versatile with the need for a rig. Of course the Cloud suite of breakers doesn't fill up memory, so perhaps Rabbit Hole might find a place once the full suite of breakers is released.

(Breaker Bay era)
lynkfox 381
Rabbit Hole and Clone Chip is likely going to be a common package alongside the cloud breakers. It would be cool to see some chip or hardware specific recursion cards to go along with this "disposable rig" concept. — FarCryFromHuman 15 May 2015