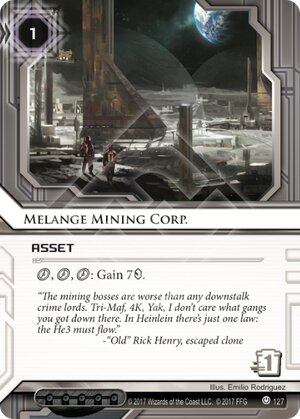 "The mining bosses are worse than any downstalk crime lords. Tri-Maf, 4K, Yak, I don't care what gangs you got down there. In Heinlein there's just one law: the He3 must flow." -"Old" Rick Henry, escaped clone.
Illustrated by Emilio Rodriguez
Decklists with this card

Melange. It sounds like a wibbly-wobbly dessert. It conjures images of cinnamon from the memory of that time you read that Sci-Fi book. In a world of wild cyber-colour, it seems to embody grey, dullness and drudgery. It's also one of your few economic options in the Core Set, and will likely be the piece in your money-making engine that sends you down one of two paths - one where you say 'Right, so how can we make this work...' or 'Screw this. Bring me naked men.'

The thing about Melange is it's tricky, it's demanding, it's fragile, and it's quite possibly just shi*t.

A full turn's worth of clicks is a huge halt on your progress in other areas (a 'tempo hit' in cool, experienced runner parlance). Taking a full turn to use means you also have to have it down the turn before, leaving it vulnerable. And hoo-boy, at 1 to trash, is it vulnerable; one of the most casual targets in any server the runner cares to target, in fact.

"A steal here...an access there...oh and sure, I'll destroy that multi-billion credit mining enterprise while I'm at it." - All the Runners

I like the idea that Melange's health and safety standards are so terrible that someone dinking the walls with a small hammer could cause an industrial catastrophe.

So you've had some bad experiences with it. It's been largely underwhelming, a liability even, and you're thinking of shelving it. But then you stop, and you look at that 7 it promises you, and you remember the early times (when neither of you knew what you were doing) when it did pay off, and you start trying to justify it, and, in the Core Set, at least, those justifications can sometimes make sense.

1 for net 6 is nothing to sniff at (hazardous moon-dust particles aside). Play it behind a mass of ice and threaten a second time for the full 7, and you'll be practically forcing the runner to stumble through your (hopefully glorious) gauntlet of cyber-nastiness, draining them of time, money, and possibly the will to live. Play it in open, have the runner ignore it (because it's obviously a trap), then make them look like a tit. Install something else in the open after that, and this time make it a Snare(!). Oh-ho! Such tears. So evil. So fun. So Netrunner.

So, yes, there are ways (at a casual level, at least) to make this card playable and in some cases actually goo. Never mind that you've put that whole 'winning' thing on hold. Never mind that in a well-tuned deck you'll make only slightly less money for far less effort. Never mind that you've put it in your scoring server, just drawn a game-ending Priority Requisition, your HQ is guarded by a single Ice Wall and the runner has that look in their eyes. It has potential for both making loads of money and psyching the runner out, which when combined with some traps can make things all the more devious, and delicious (if you like the taste of moon rocks).

And lastly, this card has become the subject of one of my first (dumb) personal goals I'd like to share - to get an HB deck, and tweak it to the point where I can use this twice in one turn. Whereupon I will shower myself in the cardboard money that follows, revel in fake pecuniary glory, and then probably never play this card again.

(Blood Money era)
Tirranek 586
(core set mentality) I don't know that I would call this a tempo hit for corp. Unless the runner is spending their turn clicking Magnum Opus, if you are preparing for SeaScorth for the win, a turn on this card is like licking your lips and shouting "Blood, blood, blood..." while the runner squirms. — Goldstep 13 Aug 2016
If installed and used early, Melange is often more than enough to carry you through the mid-game on its hazy wings. Sure, now that we have grown beyond Core Set, there are several better econ options in every faction which makes it the last resort, if ever, but this is the only one that enables space travel, future sight and gives you sexy blue eyes too! I'm completely in disagreement with your review, but I'm gonna like it regardless, because "bring me naked men" and "that Sci-Fi book". — H0tl1ne 13 Aug 2016
(No Longer Core Set alert) ((Jank Alert)) Ok guys, so Jeeves Model Bioroids. IF you are a corporation other than HB , and IF you are buildng a deck to capitalize on Jeeves alliance (Jinteki Biotech, perhaps?), then maaaayyyyyyyyyybbbeeeeeee you can do something sexy with this card? — umbralAeronaut 14 Aug 2016
But why do that when you can be Engineering the Future, triple click for 7 credits, then install something and gain an 8th credit? You just used 3 clicks to gain 8 credits and install something (for many turns) for the up front cost of 3 credits and 2 clicks. — LynxMegaCorp 14 Aug 2016
3

When I was learning the game, this card stuck out like a sore thumb to me. My whole turn for 7? It sounded bad. With Hedge Fund giving you net 4 or Beanstalk Royalties 3, Melange sounded like a bad idea.

How wrong I was. Rezzing this at the start of your turn and getting 7 can be huge. 7 is a lot. an awful lot, and a lot more than it sounds like trading away your whole turn for. Going from 4 to 11 can be the difference between rezzing ICE to keep a runner out and still then not having enough to play key operations on your next turn.

You have to be careful though. You can put it in a protected server, in which case you'll probably have to get rid of it after a little while to play something more relevant to the game state. At only 1, any sensible runner who can get to it to trash it will, and at such a low trash cost, putting it in a naked server "just to see what happens" can be risky.

Simply put, this card is a card about momentum. In the early game, behind some low cost ICE the runner can't get through yet (Wraparound, Chimera, Himitsu-Bako), getting 7-14 credits can set you up extremely nicely, and it has the immediate payout that cards like Adonis Campaign lack.

A solid card, neutral, zero influence, easy new server material for cards like Turtlebacks or Near-Earth Hub: Broadcast Center. Worth thinking about in any deck that could do with an economy boost.

(The Valley era)
Fentonizer 323
Something I feel people miss about Melange is that yes, 7 is a lot of money, but it's actually only 6 money (due to rez cost) and it takes 4 clicks to get you there (one for installing it, three to trigger). Putting it down naked and intending to use it once is on par with playing Beanstalk and clicking for credits... and that card rarely gets played these days. A single use of melange is simply not worth it given other economy options available to corps these days. Now if you can protect it over a turn and get 2 uses out of it, then you're really cooking, but the 7 credit boost is deceptively small given how much effort you've put into achieving it. — Circadia 14 Apr 2015
Yep, it's only really worth it in IG these days. — Kroen 14 Apr 2015