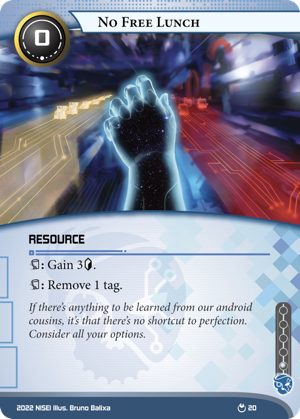 If there's anything to be learned from our android cousins, it's that there's no shortcut to perfection. Consider all your options.
Illustrated by Bruno Balixa
Decklists with this card

This card is unassuming looking but incredibly powerful.

A close comparison is No One Home. NOH counters any number of tags so it's a lot better against Hard-Hitting News. It also actually avoid tags, which means it won't trigger R+'s ability. However, while the numbers on No One Home are good (especially for runners with link) the corp can still overcome it with a strong economic lead. No Free Lunch also works during any ability window, which makes it a lot more versatile than NOH's "first time".

Sure, No One Home also prevents damage, but if you face a corp that neither tags or deals damage, it is completely dead. The definition of a silver bullet. NFL is at least an Easy Mark, not the strongest of cards but still a +1 in value. And at 1 influence, it is easy to add out-of-faction and not feel bad about it, whether you use it for tag hate or money.

Since it is a resource that interacts with tag removal, it is hard to counter. Sadaka comes to mind, which I think will be more of staple in tag decks going forward. There is also Best Defense, since NFL costs 0. However, none of these solutions are elegant. Tricking the runner into accessing QPM tagged or getting Public Trail combos off just got a lot more difficult. Tag deck will have to adapt to this card going forward. Whether that is a good thing is personal preference.

Having 3 credits on demand during a run (given the sheer number of paid ability windows) is surprisingly nice and versatile. Can catch a corp off guard by suddenly being able to fund an ice breaker, or the runner can react to a rezzed ice they weren't sure they could break or how they wanted to handle it. Similarly if a runner is unsure they will even make it through a server, then they do, they can get the credits before accessing to give more trash potential. Definitely a well flavored and fun Criminal card.