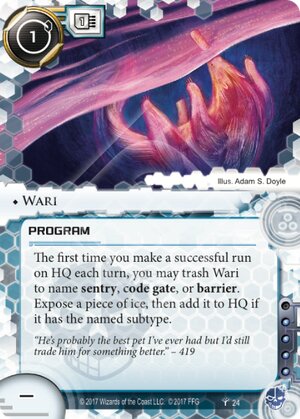 The first time you make a successful run on HQ each turn, you may trash Wari to name sentry, code gate or barrier. Expose a piece of ice, then add it to HQ if it has the named subtype.

"He's probably the best pet I've ever had but I'd still trade him for something better." - 419
Illustrated by Adam S. Doyle
Decklists with this card

I'm kinda wary of this card :) It doesn't seem too good to me. It of course brings back memories of False Echo. That card was never used except in that dreaded DDoS combo. Wari has been worded so that that combo can't be repeated, and in so doing, it is strictly worse. First off, you can and likely will totally whif with this card if you don't have support. You can't expose a rezzed card, so you have a one in 3.2? maybe, chance of getting it right if you just guess.

Now if you first expose the card (or have derezzed it previously), and it is in fact not a trap or mythic, you can add it to HQ. This will set the corporation back a single click and maybe a couple credits. But you have diluted HQ and now have the possibility of accessing that ICE. Perhaps you can follow up and have an easier time accessing the server you removed the ICE from. Inside Job or Spear Phishing would probably have been easier though. I could see perhaps using this to make an Apoc easier, but I just don't see it being used much, at least with the current card pool.

(Down the White Nile era)
quailman2101 275
One thing you can do with this card, is getting into a server, when you have only 2 breakers installed. You simply name the the IC type you can't break. Let's say you have a killer and your Paperclip installed or waiting in the heap, and fear that the mean enigma will keep you out, you name code gate and expose the IC. If it was indeed a code gate, it is out of the way and you can get in. If it was one of the other two, no problem, because you can break it. It's one of those little tricks criminals have to get into servers once that I like about that faction. — Infectiou 7 Feb 2018
Just got the pun in the first sentence, +1 like. — BlackCherries 10 Feb 2018
Will this work with Tinkering? — Deo 6 Jul 2018