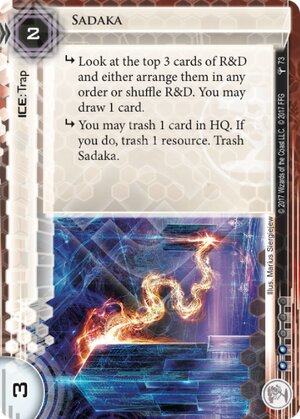 subroutine Look at the top 3 cards of R&D and either arrange them in any order or shuffle R&D. You may draw 1 card.

subroutine You may trash 1 card in HQ. If you do, trash 1 resource. Trash Sadaka.

Trap ice are special. Sadaka is better than most because it has a strenght of 3, making it less likely to be affected by Aumakua (the most popular AI). Sadaka is also the only trap that require the corp to sacrifice a card in order to get its effect, on top of having a rez cost of 2.

Before the ban list, when Film Critic was widely played, Sadaka had a superb value. Allowing you to trash Film Critic. Now that Film Critic is banned, there are less amazing ressources to trash, but still worth it. Trashing Hunting Ground, The Turning Wheel or Professionnal Contacts is a major loss for the runner. If you are lucky, trashing a fully unspent Liberated Account will cost a lot for the runner.

Sadaka is also pretty good for R&D protection, by allowing you to rearrange the top 3 and maybe put a Snare! on top. You'll also be able to draw a card, which will give you some tempo.

So, it has its place, and like all trap ice, it serves as a deterrent for runner, because the runner doesn't know the ice until they encounter it. It is a well design card.

One thing to make it better : give it some flavor text. Right now, the only thing I found was that Sadaka, in japanese, mean sure/definite. Some flavor would be welcome here.