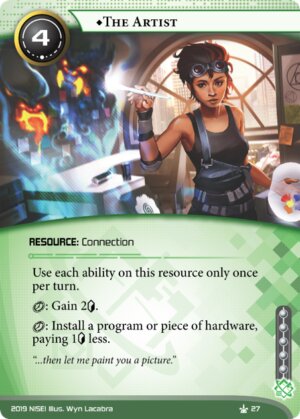 Use each ability on this resource only once per turn.

"...then let me paint you a picture."
Illustrated by Wyn Lacabra
Decklists with this card

Mini Modded and a Magnum Opus click on demand! This card is quitessential shaper goodness!

The upfront cost is not insignificant, but seeing as how you can use both effects of The Artist during the same turn, it will pay itself back in no time. With its enormous versatility I expect to see this in a ton of shaper builds, but with 5 influence it probably won't see play elsewhere.

Also, can we just appreciate that artwork for a second? Absolutely stunning! Welcome back, Kate.

(System Core 2019 era)
Cpt_nice 1598
The big question is this vs. ProCo. Since they're both click-hungry, which decks would prefer The Artist and which decks would prefer ProCo? — BlackCherries 26 Feb 2019
Why not both? They are both good targets for Career Fair and you can use The Artist to install one of the cards you draw into. — Cpt_nice 26 Feb 2019
Note : Az can via Hostage ask her "mama" to help ^^. GPI Net Tap install for 1 cred, draw with Masterwork, gain 2 — LeePo 9 Mar 2019
put DJ Fenris into Hayley + The Class Act and u got her aunts too ^^ — LeePo 9 Mar 2019
Just as a point of clarification for the comments, as a character, Az's pronouns are he/his. So it'd be asking his mama to help and getting his aunts! :) — StaticSky 19 Mar 2019
Anyone know the significance of the peculiarly different wording on this card from Modded and Kate? Does this reduce additional credit costs imposed on programs or hardware? — Amputret 27 Mar 2019
@Theyos, I think it's just more efficient wording. 6 words on Modded vs 3 here. — Goeshi 16 Jul 2019
4

A good, flexible card that helps you get some cheap programs out early and supports your economy. Don't see it as a Magnum Opus replacement because its "once per turn" restriction does not allow the same MO burst. Get this out and install cheap Rezekis, which you will later sell with Spec Work.

Most reviewers seem to like this card, so I will take the unpopular opinion:

This card is probably not worth it particularly after System Gateway.

": Gain 2" isn't a super good rate for your click, it's kind of the lowest viable rate. Cards like Telework Contract give you a net of 8 over 4 clicks (including the install), so still 2 per click on average, but the up-front cost is only 1 while The Artist costs 4 up front, only breaking even a few turns later. Security Testing also gives you two for comparison, but criminals are usually trying to stack that with things like Pennyshaver, Dirty Laundry, Red Team, DreamNet. With the artist, there is no possible way to stack anything with the "click for two credits" action. Another example is Smartware Distributor distributor -- now you can click for 3, with the caveat that it drips those credits to you over several turns. After a few turns though you are getting more bang for your buck this way than from clicking on the artist, AND the up-front install cost is zero. So why would you not rather click on that?

": Install a program or piece of hardware, paying 1 less": is also okay but not all that great. The problem is that this is hard to stack with other shaper staples like Self-modifying Code, Test Run, or Into the Depths. By comparison if you use cards like DZMZ Optimizer instead then it will reduce the cost of programs you install no matter what method you use to install them. True, this card stacks with DZMZ, but how much program cost reduction do you really need? True, this card can also reduce the cost of installing hardware, but most Shapers are not installing that much hardware right now. The Artist is probably too much influence to splash into Az McCaffrey: Mechanical Prodigy, and even then, Az McCaffrey: Mechanical Prodigy is usually trying to use things like Masterwork (v37) and Prognostic Q-Loop to install hardware clicklessly, and doesn't want to sit around clicking on the The Artist.

The card art is beautiful, but nowadays this card probably belongs in the binder. There have just been too many other better econ options printed later.