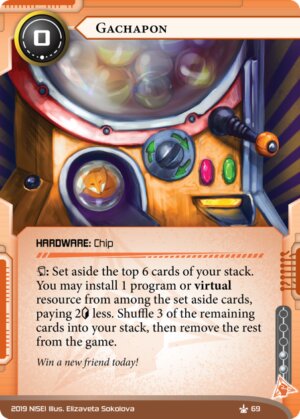 trash: Set aside the top 6 cards of your stack. You may install 1 program or virtual resource from among the set aside cards, paying 2credit less. Shuffle 3 of the remaining cards into your stack, then remove the rest from the game.

Win a new friend today!
Illustrated by Elizaveta Sokolova
Decklists with this card

With Uprising released over half a year ago, Gachapon is one of the cards that hasn't been seeing a lot of play. Which is interesting because in a set chockablock with amazing cards, this might be one of the best, in my opinion.

What does it do? After trashing Gachapon, you get to install a program or virtual resource out of the top 6 cards of your stack for 2 credits less, remove 2 cards from game, and shuffle back 3. The card is comparable to Career Fair and Modded, except that the discount is lower. While Modded doesn't see a ton of play, Career Fair does. Gachapon does lose points against it because many great resources aren't virtual (even those that should be, looking at you Daily Casts).

Despite these drawbacks I think this hardware is not to be underestimated. First off, while not obvious at first, Gachapon saves you a click. Since Career Fair installs the target from hand, you need to draw into both cards first, as opposed to the one draw you spend on Gachapon. I think this more than makes up for the fact that it is possible to not find a target in the top 6 cards.

On that note, its supposed downside (removing 2 or 3 cards) is secretly an upside. Most runner decks have bloat, extra copies of key cards and a few silver bullets they don't need in every match up. Gachapon helps you get rid of these, making your deck more lean and mean. It is also worth noting that the text says "may", so even if you have a valid target, you can always decline to install it.

Another huge advantage of Gachapon is that it can be used during any paid ability window. In a pinch, it can get a breaker during a run (if you're lucky), and if the corp doesn't rez their ice you can get Turning Wheel instead. You can dig for No One Home after being hit by Economic Warfare. Or you can install Data Folding after the corp ends their turn.

So why have we seen so few anarchs add this card? I think partially that has to do with the bin breakers. These programs are better installed without spending a click at all, rather overdrawing with Zer0 and I've Had Worse and then dumping them in the heap. Another reason is that the same Anarch lists have been pretty solid for years, meaning players have little incentive to try out new cards unless they are obviously fantastic. And I think this card is great, just maybe not at first glance. Syd7 won the American Continentals with a Hoshiko list on Gachapon. That list forgoes anarch staples like Liberated Account for more Companions, who are prime targets.

How about out-of-faction? Criminals and Shapers don't have much use for this card. Two influence is not inconsequential, they don't usually run tons of virtual resources and have other ways of tutoring programs. I do think this card is well suited for the mini factions. I have been playing this card in Sunny and it has been an absolute super star. The filtering is especially good in a 50 card deck and mother loves to fetch Data Foldings and her new toy DreamNet. Apex also likes this card, as it needs the speed and all its resources are virtual anyway. Gachapon also triggers Wasteland on the corp's turn, which is fantastic. Adam could definitely use this (it tutors Logic Bomb) but can probably not spare the influence

In short, an underrated card that has a lot of versatility. It might start seeing more play after a strong Worlds showing.

This is a really good review and I've reached similar conclusions recently - in the right deck (Companions Hoshiko, for one) I've actually found this preferable to Street Peddler primarily because of (a) the better saving, (b) the deeper dive into the stack, and (c) the ability to shuffle back important cards like a Rebirth or #Labor Rights

Gachapon is also really good in Val if you pop it mid run you get the bad pub as an extra credit towards the install cost and as you say, 50 card decks can use all the thinning they can get.

Everything is very open with a clear description of the issues. It was truly informative. Your website is very helpful. Many thanks for sharing!

Everything is very open with a clear description of the issues. It was truly informative. Your website is very helpful. Many thanks for sharing!<a href="https://www.targetpayandbenefits.review/">Target Pay and Benefits</a>

Everything is very open with a clear description of the issues. It was truly informative. Your website is very helpful. Many thanks for sharing!<a href="https://www.targetpayandbenefits.review/">Target Pay and Benefits</a>