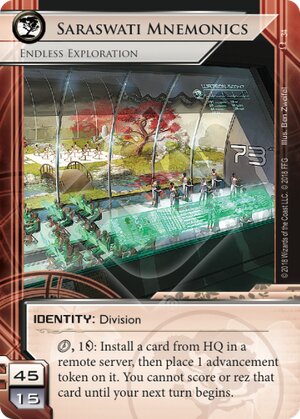 click, 1credit: Install 1 card from HQ in the root of a remote server, then place 1 advancement counter on it. You cannot score or rez that card until your next turn begins.

Illustrated by Ben Zweifel
Decklists with this card

Sarasvati (sorry, I'm used to the spelling with a V in it) is the goddess of knowledge and memory in Hinduism. I think she'd be proud of this ID. On the other hand, she's probably annoyed with me writing a review of this card with the disclaimer I'm not the best at Netrunner.

This ID forces the Runner to make educated guesses on what you have behind that ice or in that unprotected server. It does come with the stipulation that you can't rez or score it on your next turn, but slap it behind a Chiyashi and the Runner might think twice about trying for it, even if they know it's the game-winning agenda or you had four in hand when you showed off your teacup giraffe. Knowledge and memory.

As a Reign and Reverie ID, it shows what Jinteki does best besides obscene amounts of net damage: shell game. Project Junebug, Snare!, Ronin, even the NISEI agenda Sting! are scary to begin with. Put these in here, especially with the 1 cost to place an advancement token on it at the same time you install it, and you can have something scary within a single turn using a well-timed sleight-of-hand. Perhaps you need to make a big show of it. Or, if you're playing a fast-advance glacier, it turns two clicks into one for an agenda; just make sure the Runner doesn't get past your guard dog.

So why Sarasvati over the others? Tennin Institute fast advanced got kind of kneecapped with the banning of Shipment from Tennin. PE is solid on its own, but this falls into the Jinteki Death by 1000 Cuts category. RP kind of needs cards to support it. PU is an exemplary kill (just ignore its banned status for the sake of the review). Biotech is a shell game in and of itself, but its effects only fire when you flip it. After that, it's blanker than a Runner who had a really bad one. Sarasvati Mnemonics is a bit more versatile than most other Jinteki IDs. It's always fun seeing someone pull off an insane victory with this card.

Great review, although the mention of fast-advance for this ID is incorrect. As you stated yourself, you can't score a card you use your ability on. This deck wants to rush, as in fast. Tennin is better suited for FA, as you mentioned yourself.

A cool thing you can do with this ID is use your ID ability, advance, and play a Lockdown! Or use your ability, Lockdown, econ card.

Again, not the best at Netrunner. Expect stupid mistakes like that.

Can you install/advance cards with it which are not advanceable? E.g. Can this advance a Bladderwort?

Can a Corp using this ID install cards in roots that are not allowed to be installed in a root under normal circumstances, like Operations or even Ice? Specifically, could the Id's ability install Chrysalis, which has an ability on encounter?