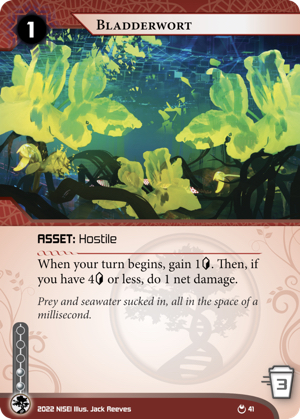 When your turn begins, gain 1credit. Then, if you have 4credit or less, do 1 net damage.

Prey and seawater sucked in, all in the space of a millisecond.
Illustrated by Jack Reeves
Decklists with this card

This is an interesting card which combines two different elements:

The latter effect reminds of cards like Bio-Ethics Association, which was a pretty powerful card, even with it's restrictions. It meant that if the runner allowed you to establish a board presence, you could suddenly rez Bio-Ethics association and get some net damage without spending a click, possibly contributing to a kill. But also, even if you don't get the kill, the runner must run and trash this or suffer on-going net damage. So if you suddenly rez two of these, this is a tempo hit to the runner, even if it's only two to trash it, and you can follow up with more pressure the next turn.

However, this is really a pretty different card from Bio-Ethics Association, because, the corp usually cannot just sit below 4 . They will not be able to threaten to rez ice, play kill cards, score agendas, and so on. Ending turn at or below 3 is usually bad because you cannot trigger Snare!, so the runner will hammer HQ and R&D. So the corp is not really looking to trigger the net damage from this card in an on-going way.

Instead, the way I could imagine this card being used is the following:

This may not be a reliable kill, it depends greatly on what cards are in the runner's hand. There are a lot of neutral cards that are commonly played that won't help us out much here.

However, the silver lining is, even if we don't get the kill, we still did net damage for each Bladderwort, which builds tempo, and now we have rezzed Bladderworts on the board, which are about as good as PAD Campaign. If the runner doesn't run these now, we get on-going money, and if they hit Snare again later without trashing these first, then they may get more net damage.

For Jinteki: Personal Evolution decks that are primarily looking to win by taxing the runners clicks, this may be like a more playable version of PAD Campaign.

That's the most positive argument for this card.

In other words, a lot of things have to go just right in order for this card to advance our game plan meaningfully, and more likely, it's slightly worse for us than a PAD Campaign.

One of the issues here is, if the corp count is not in a pretty narrow range, then hitting Snare! won't push you down into Bladderwort range. But keeping your credit count in a narrow range like this at all times may not be viable -- sometimes the corp wants to play a bunch of Hedge Fund or Celebrity Gift and bank for a power turn later.

So to make this more viable, we'd like a way to sit on a lot more credits than this, but suddenly dump them in a way that helps us do a lot of damage to the runner on their turn, and then follow up with Bladderwort on the start of our turn.

Is this play likely to succeed?

I think you are wrong, for reasons I cannot disclose right now but will be happy to discuss after worlds.

This is numerically okay. It's only slightly faster than PAD Campaign and it probably won't see much use outside of Jinteki. Or inside Jinteki.

Jinteki doesn't have the ID or operation support to play this uniced, and also doesn't have the ice to efficiently ice up widely. And, even if you DID want to invest a Karuna or something to guard a remote server, you don't have enough assets to keep that server useful after an asset or two get trashed.

I don't think the potential net damage matters much. If you are financially crippled enough that this might deal net damage, you're probably taking enough damage on central servers that rezzing an ice to protect a secondary remote is the least of your problems.