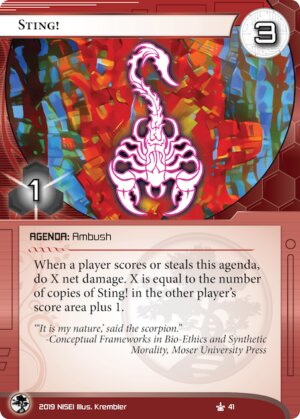 When a player scores or steals this agenda, do X net damage. X is equal to the number of copies of Sting! in the other player's score area plus 1.

"'It is my nature,' said the scorpion."
-Conceptual Frameworks in Bio-Ethics and Synthetic Morality, Moser University Press
Illustrated by Krembler
Decklists with this card

Why do we not have a review for this card yet? It feels like the elevator pitch writes itself.

Commercials aside, the interesting comparison to make is against House of Knives, the original 3/1 agenda that has made its way into many a Jinteki deck:

So which agenda do you put in your suite? That mostly depends on what the deck is trying to accomplish.

You can't go wrong with either, but I feel decks aiming for a flatline will want Sting! for more chances at landing that killing blow. Decks that want to slow the game down early while seeing an empty stack late game will want House of Knives. Of course, you can always take both since they are doing different jobs.

And of course, you can't talk about Sting! without talking about the ID this sits most at home with, Personal Evolution. It's a bit scary how good this agenda is in there, making both defensive and offensive uses of the scorpion all that much more lethal.

In PE, this is as close to a guaranteed 3x slot as a 3/1 agenda can be. It's a reliable 2-4 damage on either steal or score. Defensively, 2-4 damage is comparable to a Snare or most Urticas, if they were free and could trigger from anywhere. Offensively, this is comparable to Ronin, except it's a Ronin which only requires 3 advances and no extra clicks to fire, and also defends itself everywhere. Overall it's one of the stronger net damage cards in the card pool.

Mitosis synergy: because this card works effectively whether the runner checks or not, it is exceptionally useful in Mitosis plays. In Jinteki's card pool, Sting arguably generates the most reliable value from Mitosis's 2 advancement counters. After you Mitosis, a Runner that takes 4 damage from your Urtica (first install) will get crippled by Sting (second install) whether they check it or not. They also have to guess whether your third manual install is a Snare or Reaper Function or another 3/1 agenda.

Outside of PE, it's more ordinary. 3 deck slots for a potential 3-5 net damage is maybe situationally valuable depending on what agenda density you're looking for and/or how much low-cost passive defense you need. It might be playable in Issuaq as a better-than-blank 3/1 even though Issuaq probably cares about 3/1 than about the net damage.