Whenever the Corp rezzes a piece of ice, place 1credit on Ice Analyzer.

You may use credits on Ice Analyzer to install programs.

"If you know the source code you can write to beat it, or just rejigger it a little and make it yours. That works, too." -Exile
Shaper • Ed Mattinian • System Core 2019 57
All sets:
Links: Decklists | ANCUR 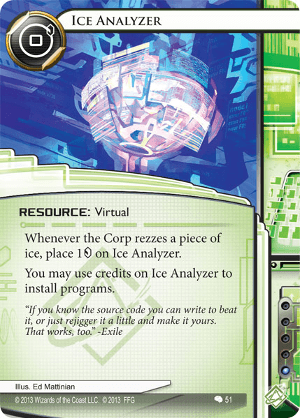 Prior to this point, Ice Analyzer has seen little play, because, as mentioned by earlier reviews, it is not only a niche card, but one that, at some some point, will become useless, when all the programs are installed.

However, the appearance of Khan: Savvy Skiptracer's breakers changes that. With Golden's and Peregrine's (and, presumably, the Fracter's) ability to derez the corresponding ice for 2 and returning themselves to grip, there now potentially could be a rig that never finishes installing all of its programs.

Of course, the Khan breakers are expensive, with install costs of 5 normally, or 4 if Khan passes an ICE first). Consequently, their derez ability synergizes powerfully with Ice Analyzer. Were one to have 3 installed, each reinstall would only cost 2, and the Corp would be subsidizing the remaining 60% by re-rezzing the ICE.

Throw in some additional derez cards, and maybe something like LLDS Processor, and there'd be a decent-strength criminal ICEbreaker suite that could do serious economic damage and still get in anywhere.

(Escalation era)
jcsung 19
Nice thinking however London Library and Autoscriptor still make this cards unnecessary. If the credit was usable for anything it would have been a nice addition. Technical Writer is so much better for this setup. — Stigma 24 Oct 2016
I love London Library with the birdies. However there does definitely exist the danger of unsuccessful runs if you are using all three of them with London Library thereby trashing your Autoscriptor. I think I might like to try it with Ice Analyzer once the fractor is released. — quailman2101 25 Oct 2016
3

Ice Analyzer is basically Compromised Employee for Shapers. However, there are a few differences between the two, some obvious, some more subtle. They are, from most obvious to least (in my opinion):

That last one can be both good and bad. On the one hand, if it's trashed by, say, Corporate Town, you'll lose all your credits in IA's bank. On the other hand, if you get hit with Closed Accounts, the corp would also have to pay a and 2 per copy of IA with credits on them to completely drain you of your cash available for installs.

Ultimately, I think both cards have their place. In either case, getting them out early is everything. For the most part, I'd just expect IA to be chosen over Compromised Employee for Shapers, and vice-versa for Criminals. Anarachs get their pick between the two, if they really want either, but usually they'd rather spend their influence elsewhere.

(The Universe of Tomorrow era)
Pikeman 265
"IA is virtual so it can survive Sacrificial Clone" But it dies to Foxfire :( — StashAugustine 18 Sep 2015
Another benefit of it being free is it's good food for Aesop's Pawnshop once you're done with it. — EnderA 19 Sep 2015
3

Can be a surprisingly good card though doesn't see much play, probably because on paper it doesn't look that good. But in my experience with it it actually can save a lot of money, I've actually gotten a Femme Fatale down with this thing paying only 1 that's how much they can save.

I feel this fits best into Nasir Meidan: Cyber Explorer decks or any Ice Destruction deck as the corp will be resin alot of ICE this way.

Can give alot of 's.

's are not in your Credit pool so can't be lost. (unless trashed)

Only 1 Influence to take out of Faction.

It's a resource so can be trashed when tagged.

The longer it takes to get one into play the less useful they become.

's can only be used on programs (so if you run out of things to install it becomes useless).