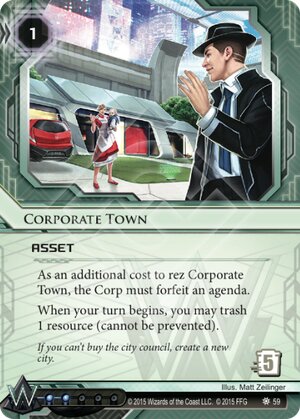 As an additional cost to rez this asset, forfeit 1 agenda.

When your turn begins, you may trash 1 installed resource. Trashing a resource this way cannot be prevented.

If you can't buy the city council, create a new city.
Illustrated by Matt Zeilinger
Decklists with this card

Corporate Town has the ability to wreck someone's economy. But in some decks, it's now mandatory, because of one card: Film Critic. Film Critic is what Clot is to Fast-Advance, except for Argus Security: Protection Guaranteed, Jinteki: Personal Evolution, and any deck stacked with cards with steal effects, as noted in its reviews. It requires an answer, and Corporate Town can be that answer. It also pairs well with The Future is Now to get it when you need it (and not show the runner.) The best alternative is to tag them to trash Film Critic, but most Runners fight tooth and nail to prevent being tagged on the Corp's turn, or possibly Contract Killer (however, that costs 4 influence, requires several clicks, and only hits Connections, although it can also do damage), or Snatch and Grab (but only trashes a connection and requires a trace, so much more narrow.)

Many of those same decks would gladly run Archer, after all, it's cheap, brutally effective, and they have cheap agendas to spare! For the same influence (or lack thereof), they now have Corporate Town - the card that ends their woes against Film Critic, with the ability to cripple decks even if Film Critic isn't a target.

When it's good, it's very good. Worst case, you lay it out alone face down and force them to decide if it's worth the 5 to trash, after spending a click to run it. Best case, you ruin their entire game plan, taking out Film Critic, a loaded Kati Jones, stacked Off-Campus Apartment, Tri-maf Contact for meat damage (maybe even a kill!), stacked Personal Workshop, Aesop's Pawnshop that's literally their econ engine, Wyldside draw engine, Daily Casts before they take any credits, loaded The Supplier, make them use Hades Shard, or Utopia Shard, Liberated Account, Professional Contacts... Kill them all. Film Critic was the tipping point; Corporate Town is now essential in the right deck.

And if you're NBN, you can run License Acquisition to install+rez it for free (even from Archives!), but then they get a turn to take it down before it has its effect. Do note, NBN can also run Character Assassination, or Breaking News + trash from tag.

TL;DR: Corporate Town, tagging them, Contract Killer, or Snatch and Grab. That is, until they print another truly viable resource-hate card. (Having a requirement of them being tagged kind of defeats the point... I'm looking at you Freelancer/The All-Seeing I)

(Old Hollywood era)
EnderA 493
I suspect we'll see a lot more tags when D&D comes out, diminishing the need to forfeit an agenda to trash resources. Our biggest counter might be Surveilance Sweep, enabling us to actually tag people with Ichi 1.0, Hunter, and SEA Source more consistently. If they wish to break it, they have to STEAL an agenda, enabling Midseasons again. If not, you're golden to Trace with everything else. — HolyMackerel 22 Aug 2015
NBN undoubtedly prefers the tag->trash route because so many of their cards enable tagging, but in a Jinteki Thousand Cuts or Cambridge deck you can't wait for them to encounter a snare and not clear the tag. So then the choice is between importing this or a reliable tagging card. If a non-NBN deck is running tag, they're probably running Scorched Earth, and would rather just scorch their opponent to death than spend clicks trashing resources. In the end, it's either Corporate Town or getting them tagged on your turn. — EnderA 22 Aug 2015
(Or Contract Killer.) — EnderA 24 Aug 2015
(Or Snatch & Grab.) — EnderA 2 Sep 2015
I'm confused, can't the corporation trash a resource if the Runner is tagged? NBN has many ways to tag an opponnent during a turn. Jinteki's main tagging is three Snares, but splash in an operation or three and you can get the runner tagged often. — Personal Snare Iris 21 Sep 2019
4

In a meta full of resource-based economy (Security Testing, Symmetrical Visage, Kati Jones, etc.), this is indeed a powerful asset for the corp. At the beginning of your turn, trash any resource the runner has installed. Loaded up Kati? Earthrise? It's dead.

But the additional cost... is so steep. Is it worth trashing a Hostile Takeover to trash any resource? It can be a hard decision to make. I admit that I was incredibly skeptical about this card. Sure, trashing resources for free once a turn is nice, but sacrificing an agenda for it? That seems too high.

Until I found ninj7's Exclusivity NBN Glacier deck build and my whole perspective changed. In the build, ninj7 uses License Acquisition to function as a sort of Eliza's Toybox, allowing you to install and rez Corporate Town for free. Using this card in a glacier deck ensures that you're nearly guaranteed to pop at least one of their resources.

In this case, my normal playstyle with this card includes installing License Acquisition behind some kind of hard ETR like Little Engine or Tollbooth, scoring it, and then installing Corporate Town in that same server, either from hand or archives. Now the server, which they already couldn't get into because of the ice in front of it, becomes even more dangerous because the runner can't install resources until this asset is trashed. If it's installed behind a Tollbooth, the runner will need at least 9 credits in order to trash this asset, and the runner can't use resources to get those credits. Brutal.

I imagine there are other types of builds that will use this card. Many glacier builds utilizing 1-point agendas (or other kinds of tricks) can punish a runner.

--This card is like Archer: in the right deck, incredibly destructive by prohibiting runner's momentum. For other decks, it'll be significantly less useful.