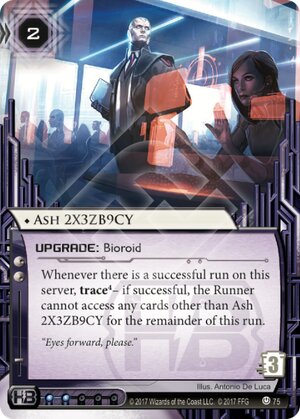 Whenever there is a successful run on this server, trace [4]– if successful, the Runner cannot access any cards other than Ash 2X3ZB9CY for the remainder of this run.

Ash 2X is an incredibly important card for HB, a staple of their glacier decks.

These decks build up heavy ice defenses on a remote server then use that server to brute force score out an agenda by making it too expensive for the runner to steal. Ash 2X is crucial to this plan as he allows the Corp to leverage their credits against the runner's to protect an agenda in the server. (Compared to the normal case that if all the ice is rezzed, the Corp credits are irrelevant and the only question is if the runner can afford to break all the ice).

Ash can also be used on R&D or HQ to protect against the runner getting a lucky agenda pull, which can be worth considering if they are on 4-5 AP already and so only one agenda away from winning. Also, as he prevents access to all other cards in a server, he can defend important assets or upgrades as well - such as a Melange Mining Corp.. However, do note that Ash 2X is unique so he can only be rezzed on one server at time.

The other 3 corps have a roughly analogous upgrade to defend agenda scoring. Jinteki have Caprice Nisei, who is an incredibly strong defense, with a roughly 2/3 chance to keep the runner out, although she does not provide the sure scoring window that Ash can when the Corp has a strong economic lead. NBN have Red Herrings, which is similar and cheaper, but cannot leverage the Corps current credit pool to outspend the runners (and also cannot defend assets). Finally, Weyland have Off the Grid, which is a bit different, but in conjunction with a well defended HQ (never a bad idea!), has a similar outcome of forcing two runs in order to steal an agenda.

Comparing the 4 cards, only Caprice has proven as strong as Ash 2X, but at a much higher influence cost. Accordingly, Ash 2X is probably the most commonly splashed card into any faction glacier deck. In Weyland and NBN glacier decks, he may splashed in preference to their own equivalents. In HB or Jinteki glacier decks it is not uncommon to see both Ash and Caprice in the same deck - they work very well together, either in the same server making it virtually impenetrable, or protecting a different server each.

There is one particular ice that has a special relationship with Ash, and that is Excalibur. When this ice is in front of Ash, and the Corp has enough money to ensure Ash's trace succeeds, the runner is in a very bad place. They must find a way to break this 3 strength ice that is not barrier, code gate or sentry, otherwise they absolutely are not accessing the contents of the server for a turn.

In conclusion Ash 2X is a uniquely powerful card that is a cornerstone of the glacier archetype, and you should strongly consider 2-3 copies of him in any glacier deck.

2016 update: Runners got a pair of new cards to mess with Ash:

Councilman: This guy is not too hard to work around. If you're planning to rely on Ash next turn to protect an Agenda, rez him a turn earlier than you need him, then either an uninstalled Councilman never gets a chance to be used, or an installed Councilman gets used and then you can rez Ash again when you really need him. Rezzing him early also helps against the occasionally seen Drive By.

Political Operative: Now here is trouble, Ash's worst enemy. If they get a PolOp installed, say goodbye to Ash. The best you can do is either install double-Ash in your remote, or keep the runner out of your HQ.

(Breaker Bay era)
Ber 2609
I also think this works well with red herring, use ash to force the runners creds under 5 so they can not get passed red herring. — Vengryn 9 Mar 2016
Why has this card fallen out of favour? It seems to have been cut from most of the recent Foodcoats lists, — Skandrino 27 Jun 2017