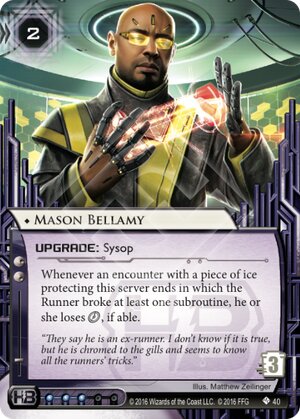 Whenever an encounter with a piece of ice protecting this server ends in which the Runner broke at least one subroutine, he or she loses click, if able.

"They say he is an ex-runner. I don't know if it is true, but he is chromed to the gills and seems to know all the runners' tricks."
Illustrated by Matt Zeilinger
Decklists with this card

Mason Bellamy lets you reduce the number of clicks the runner has during and after a run. He doesn't stop a run and he doesn't have much to prevent being trashed (3 isn't high enough to protect an annoying sysop). How much value he adds to your setup depends on how well you are able to capitalize on a runner who's running out of clicks (pun intended).

There are some obvious synergies.

Especially the Knight/Bellamy/Friends combo feels like it could work well enough to make a server with three pieces of gear check ice be scary even in the late game.

There's also Heinlein Grid. If the runner breaks any piece of ice they lose a click (Bellamy) and thus all credits (Heinlein). Trashing this combo is going to be a bit of a problem when the runner has no credits. Add a piece of cheap ETR ice behind something the runner has to break and the runner isn't even going to see the inside of your server. A traditional deck (lot's of economy and ice breakers) is going to be locked out by that setup.

Ice destruction (anarch) and bypassing (criminals) could still work, but even getting hit by the combo once is going to be a major tempo hit. Alternate cost breakers (e.g. Faust, Shiv) work well enough to get through to the server, but still leave the runner with an empty bank account. Temüjin Contract and other cards that pay out on successful run do give the runner a bit of money back which they could use to trash the combo, so it's best to stop them from reaching the server in the first place. Cards like Guard (no bypass) and Self-Adapting Code Wall (no Parasite) are your friend here. Against cutlery/Eater there isn't a silver bullet though, Architect can be run through without breaking so it's not good enough to prevent the combo being trashed.

(Terminal Directive Cards era)
Silv 335
Why no mention of Heinlein Grid, possibly the most effective card to pair this with! — LynxMegaCorp 14 May 2017
Used the wrong search term ("clicks" instead of "click"). Heinlein is indeed a sick combo with Bellamy, I'll edit it in. — Silv 15 May 2017
Also Seidr Labs — thunderfist 15 May 2017
I did consider Seidr Laboratories. But the ability is only really useful if you can make it work reliably and the runner isn't going to run a server with Bellamy in it repeatedly. Obviously Bellamy doesn't hurt but I don't see the combo as adding enough value to be worth mentioning. — Silv 15 May 2017
Question: what's the optimal Rez window for getting the maximum effect of Bellamy? — PowerlessCube 29 May 2017
Is it 2.3 -"Rez approached Ice?" Or would it be after they broke the ice and are going to stage 2.1 again or 4.1 — PowerlessCube 29 May 2017
The interaction with Strongbox seems pretty strong and obvious. I'm surprised it wasn't mentioned. — NetrunningAmok 4 Jun 2017
Chromed to the gills. — Murse 6 Jun 2017
Just a warning to corps who plan to use the Bellamy/Heinlein combo: while it will keep an Iwakah Project 100% safe (Film Critic/Imp/etc. aside) for a turn behind even a single ETR ice, the upgrades themselves can be trashed without firing if the runner simply runs the server last click, so your server doesn't actually take a specific rig to dismantle. — CelestialSpark 5 Apr 2018