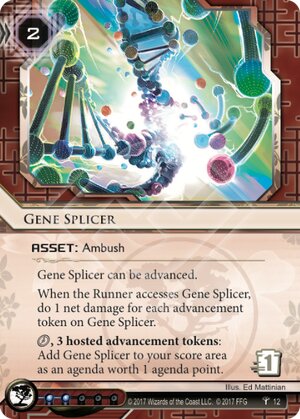 Gene Splicer can be advanced.

When the Runner accesses Gene Splicer, do 1 net damage for each advancement token on Gene Splicer.

Gene Splicer is an interesting time bomb. It's a Catch 22: damned if you do, damned if you don't. It's both a trap (net damage) and a way to score agenda points given enough inattention from the runner (time bomb).

As a trap it's a bit on the light side. It does 1 net damage per advancement token. Consequently it only triggers when installed, it doesn't help centrals. On the bright side it doesn't cost anything to trigger. Compared to Project Junebug it's 1 net damage per advancement, not 2, which is the difference between a mild setback and a significant setback, given 2 counters. Unlike Snare! there's no 4 activation cost, but no tag either. Also I'd consider Snare! a different kind of trap, more of an R&D/HQ defense since you can't advance it normally to look like an agenda. Psychic Field has the potential to do a lot more damage but is much harder to pull off since it has to be installed and you can't advance it normally. Hokusai Grid only does 1 net damage and costs 2 to activate, but it's more flexible since it's an upgrade that can protect an agenda (nice with Obokata Protocol). Of course you can add a Hokusai Grid to a Gene Splicer server to make it look more like an agenda and add a bit of sting if the runner falls for it.

As a time bomb, a card that the runner must answer Gene Splicer is relatively mild. A Ronin is much more dangerous with the potential to trigger a flatline. Allele Repression is in a way more insidious than Gene Splicer, not providing clear agenda points but allowing the corp to both recur cards and hide agenda's in archives during a run on HQ; not to mention all kinds of tricks when combined with other Jinteki card management tools. Possibly there are more Jinteki time bombs, I just don't know them off the top of my head and time bombs lack a predictable text to search for in Netrunnerdb.

Note that Gene Splicer can also be seen as a straight 3/1 that doesn't give the runner anything when stolen and thus as a way to increase agenda density.

Now to combo's and worthwhile interactions:

And here's a combo that looks interesting, until closer inspection:

Somewhat out of the box Gene Splicer might see some play in Weyland because when scored it counts as an agenda and thus can be forfeited to power e.g. Archer or Jemison. It can also be liquidated with Back Channels (a trick that's also useful in Jinteki btw).

(Sovereign Sight era)
Silv 347
I wouldn't call it a straight 3/1. It needs another click after the 3 advancement tokens, so it's a 4/1, kinda. A card, 5 clicks total (including install) and 5 creds total (rez cost plus advancing normally) is not a cheap way to get a point. 3/1s are played for their effect and scoring this is like a blank 4/1. A light trap, as you say. A mild time bomb. And n expensive bonus point. It can fulfill 3 different roles poorly. Well, if you can make a deck where all roles are used, this could be a flexible card... — Krams 3 Jan 2018
Err, you're right. Braino. It's indeed very bad, which is good since if it was a straight 3/1 it'd be too powerful since the runner can't steal it. — Silv 3 Jan 2018
I don't think you can see the roles separately really. The three roles combine to create a very Jinteki time bomb. There's no clear "you must do this or else" for the runner so the runner is left guessing what the corp is hoping for. And compared to Junebug you have a chance of at least hitting your opponent even if they guess it's a trap. So for players who are less experienced in setting traps it's a better choice than Junebug. — Silv 3 Jan 2018
In Weyland, I guess you could fast-advance it with Dedication Ceremony. — Toper 3 Jan 2018
Haha, yeah, FA with Dedication is an option of course :D — Krams 4 Jan 2018
It's also a good target for Mushin, save 3 credits and 2 click — spleen86 4 Jan 2018