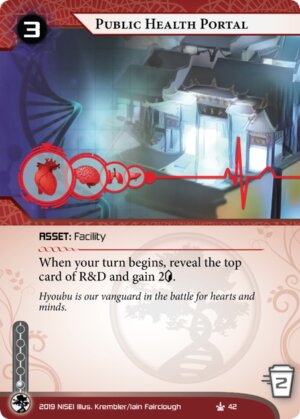 When your turn begins, reveal the top card of R&D and gain 2credit.

Hyoubu is our vanguard in the battle for hearts and minds.
Illustrated by Krembler Iain Fairclough
Decklists with this card

In my experience it's hard to justify this card in a deck. If you're playing it in a non-Hyoubu Institute: Absolute Clarity deck you're down one credit when you rez it, putting you in a similar spot as PAD Campaign, but you end up with an asset with a lower trash cost and that provides the runner with a free Corporate Defector, more or less. 2 credits is nothing to sneeze at and the Runner will likely know this, so you'll probably need to put this behind some good cover otherwise they'll trash it and you'll have lost an asset and paid a credit for the privilege. A bit risky - probably won't see this card in the other factions' decks.

Within Hyoubu Institute: Absolute Clarity you break even on the rez and from then on it's 3 credits a turn. Not bad at all! That's Daily Quest territory, and like that card this one also requires a good amount of protection and forethought. However, it also comes with a bit of anti-synergy with some of the other tools Hyoubu has at it's disposal. Celebrity Gift, Drudge Work, Hyoubu Institute: Absolute Clarity's own ability, and others stop generating that extra credit since it gets used by Public Health Portal's passive. The trade-off sort of works - you'll only play so many Celebrity Gifts or Attitude Adjustments in a game after all. But there's always the variable of your draws being slowly revealed to the Runner, which can really screw over your plans if the Runner is attentive enough.