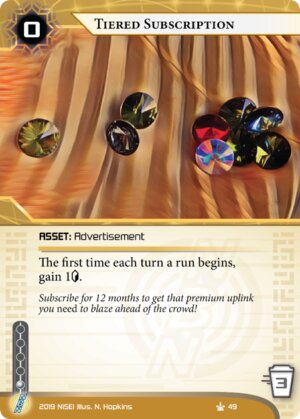 The first time each turn a run begins, gain 1credit.

Subscribe for 12 months to get that premium uplink you need to blaze ahead of the crowd!
Illustrated by N. Hopkins
Decklists with this card

Tiered Subscription is one of 3 new advertisements in Downfall and at first glance, it looks quite attractive (even outside of Spark) with its strong rez/trash numbers. It’s definitely the strongest of the 0 instant-rez advertisements and that’s quite a big deal as Spark when you can drain credits turn 1 without ever losing initial tempo. Its 3 trash cost isn’t too bad either and is on-par with the other commonly played advertisements/campaigns.

However, in testing I found Tiered Sub alone does not always do enough for you. Tiered Sub’s true use is being an additional supplement to other must-trash assets. Without the latter on the board, the Runner can often ignore runs altogether until they are fully set up, leaving you creditless turn-after-turn while you were wishing you had an installed PAD Campaign instead. In that regard though, Tiered Sub can really find a home in horizontal decks who constantly require the Runner to run and interact with the must-trash assets. At 1 influence, it could be widely splashable anywhere.

What about the alternatives like Paywall Implementation or Sundew? Paywall is in most cases likely to make you more money but is 1 more influence and takes up your current slot while Tiered Sub could combo with ELP or Service Outage. Sundew is a stronger way to force the Runner’s decision-making and is the superior option in RP but is pricier in influence and isn’t in-the-black 99% of the times that Tiered Sub is.

In conclusion, you want to use Tiered Sub to put the Runner into a lose-lose situation. If they run and trash/steal your stuff, Tiered Sub makes you money; if they don’t, you steamroll them with your other tempo assets.

(Downfall era)
BlackCherries 344
I agree it is best when you combine it with a must trash asset. It is very good to run with Jeeves and MCA, especially since in spark you will have three Marilyn already. It is also really good vs run-heavy criminal. — Cpt_nice 29 Mar 2019
0

Out of Spark, if you were to install and rez one of these, then the runner immediately ran and trashed it, you’d have spent 1 to gain 1 and cost the runner 1 and 4. A 5 swing for a click isn’t too shabby, though I’m not sure it’s quite strong enough to make the cut. Slots be tight, as they say.

(Downfall era)
ptc 81
A comment on both of your reviews: I like tiered subscription in Spark because it's free, and it's not an ice. Spark really wants to be rezzing a *lot* of ads fast, and those two attributes are the ones ads need to have in order for that to happen. My Spark doesn't run any ad ice, because the runner has too much control over when you can rez them, and that means their additional synergy with your ID fails to outweigh the fact that Slot Machine is just better. — Greasythumb 29 Jul 2019