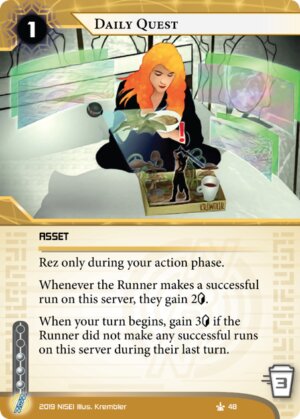 Rez only during your action phase.

Whenever the Runner makes a successful run on this server, they gain 2credit.

When your turn begins, gain 3credit if the Runner did not make any successful runs on this server during their last turn.

Daily Quest is one of the more interesting Corp economy cards.

If all goes well, Daily Quest gives you 3 per turn. That's a huge amount of income, the same rate as Commercial Bankers Group (a card that was restricted for quite a while and is played in almost every deck that can protect it). So as long as you can keep your Daily Quest up and running, it's going to be a highly effective source of economy.

Of course, this sort of power comes with a drawback. Daily Quest has a few drawbacks, but they're all connected to each other: unlike most economy cards, this one really needs to be placed behind ICE. And not just a Pop-up Window, either, but some proper ICE that will tax the runner out of wanting to make repeated runs on the server.

Instead of listing the drawbacks, I'll instead visualise them with a few examples of the ways Daily Quest can go wrong, taken from actual games:

So in order to make Daily Quest work, you have to place enough protection on it that the Runner can't ever cheaply launch repeated runs at it; if they can do anything to make runs on it cheaper, then you've basically created an economy card for the Runner, not for yourself. The usual methods of protecting assets in asset-spam decks aren't going to help, either; the Runner only needs to run its server, not to be able to trash the asset. This thing needs to be Protected™, more so than you'd typically protect a central server.

This basically means that there are only two ways to use Daily Quest which actually sort-of work. The less janky is to use it as though it were a burst economy card; many decks will have one heavily protected server, their scoring server, and Daily Quest will normally be safe there if you aren't using it for anything else. You will eventually have to overinstall it once you need your scoring server for an agenda, but 3 per turn while you're waiting for your scoring server to be in demand is still quite a lot of econ; even just two turns of Questing is the same gain as IPO, and three turns is an 8 profit which is the sort of gain that most single cards can't deal with. Many slower decks will frequently go three turns without any other use for the scoring server. I frequently see Corp decks do this, and it works, although it does feel a little like a waste.

The jankier way is to make a deck designed to protect Daily Quest, possibly even multiple copies at once. You now face the imposing task of protecting two (maybe three) central servers, a scoring remote, and an economy remote or three; against aggressive Runners, it's difficult enough just to protect your centrals and one remote, so fitting in some additional protection is even harder. But maybe you feel like it could be possible if your entire deck was focused on it. So you fire up a "horizontal with ICE" ID, such as Asa Group: Security Through Vigilance or Acme Consulting: The Truth You Need, cram your deck full of enough ICE to protect everything, and sit back and watch the credits roll in. (I've tried building Daily Quest decks out of both of these IDs, and playtested them against real opponents, specifically so that I could write an informed review of the card.)

You then face a couple of new problems. One is that Runners are often quite good at making single runs on important servers; after all, they typically want to stop the Corp scoring agendas, and getting into Daily Quest's server is comparable in difficulty to that. You can't use any sort of shell game to protect Daily Quest, either (as you could with a non-public agenda); it has to be face up and rezzed to work. So the Runner knows exactly what they're aiming for, gets into the server, and pays a net 1 to trash it. Sure, there are ways to recur trashed assets, but now you've devoted pretty much your entire deck (and maybe a decent proportion of your influence) to Daily Quest, you'll find that you don't have the deck space to function without it, and so the Runner just needs to make a few precise runs and your economy falls apart.

The second problem is, say you do manage to protect your Daily Quests; there have been some games where I've done it. One game as Asa, I got up to 105 in my credit pool with the help of three Daily Quests (and a couple of PAD Campaigns). The issue is, while you're busy setting them up and icing them and icing your centrals and starting to build a scoring server, you're necessarily going to draw a lot of cards. And Netrunner has this annoying rule that your deck has to contain a certain number of agendas, so those are going to end up filling up HQ and eventually having to be placed somewhere before you're ready. You're already dedicating much of your deck to ICE and economy assets and backup economy so that you can afford to rez the ICE that protects the Daily Quests and to tide you over when they inevitably get trashed; are you going to find the slots for agenda reshuffle too? And if you do, how are you going to stop the Runner simply charging up their Turning Wheel for 20 turns and then accessing the entirety of R&D in one huge run?

The basic problem with the Daily Quest deck is that economy does not win a Corp games. Economy wins a Runner games – a Runner who is rich enough should nearly always win – but the same is not true on the Corp side, because you are restricted by how much ICE you can install and rez and clicks to advance agendas and room in your various servers to hold everything. So you start looking at cards that protect your agendas using credits rather than ICE – SEA Source combos, say, or Punitive Counterstrike – and somehow find the deck space and influence for them.

Then you discover that Runner economies are crazy at the moment, and even when you get up to 105, the Runner managed to earn 42 in that time and is taking enough precautions against Punitive Counterstrike that you would need to hit them with three of them to flatline. So even though you have one of the most monstrous Corp-side economies in Netrunner, it's still somehow never enough.

Conclusions: Daily Quest has a great effect while it's online, but keeping it online is not worth the trouble; it is possible to protect it, but at the cost of having a deck that doesn't do anything else (such as winning). I'd love to see the Daily Quest deck work, but somehow don't think that it does. On the other hand, the card can still be worth a deck slot in some decks: putting it in your scoring server for a few turns, treating it like burst economy, is a good way to make use of some dead time in a glacier deck. Just don't be greedy; as soon as you need your scoring server for something else, simply go and score out. Rolling around in your huge piles of cash is all well and good, but (in an unfortunate flavour disconnect, especially if you're Weyland) it's agenda points you need to actually win the game.