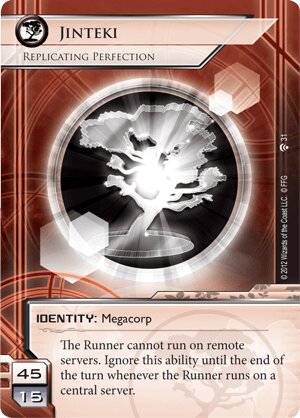 The Runner cannot run on remote servers. Ignore this ability until the end of the turn whenever the Runner runs on a central server.

I continue to give review to orphan early cards and I'm just amazed to find this one doesn't have any yet !

Big fricking RP, one of the most popular Corp identity, mind you.

Well, I won't make a deep study of its power, you all have seen it in action if not ever played it, but just make a little history.

First, it was weak. But it was a whole faction concern. Jinteki: Personal Evolution did not make it either. Jinteki was only the mind game faction, and used to lack all it has today, and all other corps already has at the time : good economy and good ices. Did you want to play Jinteki, you had to fill all these gaps with your influence, and then, probably still had to click for .

But at this time, RP has been the subject of a seminal blog post on BGG (https://boardgamegeek.com/blogpost/19853/my-secret-love-affair-jintekipersonal-evolution) theorizing the "work compression", nowadays best known as "click compression." A first stop to fame.

The bonsai starting to see the light during the Spin cycle, with the release of a bunch of good cards : Celebrity Gift first, giving a strong economy event while sticking to mind game flavour ; Sundew, then giving a dripping economy, especially strong with RP ; also some other nice cards, if not that impactful : Yagura, Himitsu-Bako, Shock! ; and then Caprice Nisei, which really put a boost for RP.

Then Honor and Profit was released. Every deluxe tends to offer more power to one of the two faction they cover, and Jinteki was the real winner of this one. RP became tier-1 (and PE did well, too) and sticked to it for a while. Well, it seems to have lost a little bit of its lustre these last days, and I don't really get why, but it remains a strong identity.

(Data and Destiny era)
Lupus Yonderboi 245
that blog is about PE not RP lol... — TKO 12 Nov 2015
Damn ! Gonna buy some MU for my brain... — Lupus Yonderboi 12 Nov 2015
It's crazy to me to think about how weak RP used to be, knowing how it's such a consistent contender now. Jinteki was definitely the worst Corp out of the box (core set). Of the 14 jinteki cards from the first cycle, I'd say maybe 4 of them were good (RP, Fetal, Ronin, and ToL) with the rest being underpowered or highly situational. I'm glad FFG stuck to their guns and gave these first two IDs the support they needed to become great! — PureFlight 26 Jan 2016
3

Much like the last review by Lupis from 2015, I'm amazed that there aren't more reviews for this ID. I started playing ANR around the Red Sand Cycle in 2017, so while technically RP hadn't rotated yet, it wasn't a dominating part of the meta (or at least my meta) and so I didn't get a lot of chances to analyze how to play against it before it rotated.

Now that it's back, I'm forced to analyze how to beat it.

RP seems innocent and simple enough--you can't run my remotes until you run (running being the important distinction) my centrals. The obvious strategy in RP is to then ICE up centrals while having lots of nasty things in your remotes. Sundew is probably an auto-include, but it's tough as a runner when you start also seeing things like Synth DNA Modification, Hostile Infrastructure and Bio-Ethics Association. Suddenly "trash Sundew on sight" can no longer be your only option, especially when you're having to break through the central ICE each time you want to do it. It's also fairly common to see Enhanced Login Protocol as well, which just adds salt to the wound. Now suddenly you have to spend 3 clicks a turn just to trash one thing--it can get pretty tough pretty quickly.

I certainly don't have extensive experience against this ID, but from what I can tell, you have to be very precise against RP. You can't run and hit centrals in hopes of getting lucky. You can't trash every single asset on the board because you're probably not going to have enough money and time. Instead, it seems best to stay patient, build up money and installables, and then strike after you see RP draw up and they either A) Install a few assets or B) Don't install anything. Chances are higher that there's something in HQ during these times, and if you happen to miss something good in HQ, you can spend your next click getting rid of a key asset. ELP is particularly oppressive if you don't run currents, as you can never be truly sure when you can grab an agenda to turn it off. I know that every Runner game is a game of odds, but I usually feel more-so like I'm grasping at straws when I play against RP, even when I win.

That's kind of it from what I can tell, and I know it's not much. Partly, I'm writing this review in the hopes that players with more experience than me will add their thoughts via comments, or perhaps make a review of their own. What am I missing? Is there more to it than that? How do you keep up with the combination of taxing ICE that you're forced to run and the onslaught of assets? Any insight is appreciated. :D

(Downfall era)
Chezni 70
I feel it's important to note that 'you can't access my remotes until you access my centrals' should state "run" instead of "access". Huge distinction. — LynxMegaCorp 28 May 2019
Nice! That's definitely a piece of the puzzle that I was missing. Now I understand why all the RP decks I see use spikey ICE. This means if they stack ICE on centrals, you can break just one and jack out to save a bit of cash if you don't want to access. Likewise, you might also let an Envelope or two fire if you don't care about your hand and want to save a few creds. — Chezni 29 May 2019
Exactly. If it were access, RP would be quite a bit stronger (and less fair). — LynxMegaCorp 29 May 2019
I think diagnosis is a big deal with RP. If they're doing some big asset spam combo, you need to work out the key thing to trash. They often have quite a lot of moving parts, which means there are vulnerabilities if only you can work out what they are. Conversely, if they're basically running a glacier with a few strong econ assets then you can afford to spend time moneying up. In that instance they want you to faff around trashing things because then you'll be broke and they'll be able to score Nisei Mk II — Greasythumb 29 Jul 2019