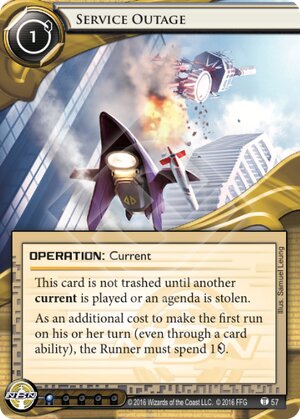 As an additional cost to run for the first time during their turn, the Runner must spend 1credit.

This and Enhanced Login Protocol are pretty similar, right? They both tax the runner's first click, they're both currents, etc. So, which one is worth using? Let's see if we can figure that out by looking at how ELP is normally used, and how they're different:

tl;dr this card isn't great. In faction it's edged out by a plethora of other options, and out of faction there's a less consistent but much more powerful current to use. It may see use in horizontal taxing decks (Perhaps CTM just found a fun new tool for being even more oppressive?), but outside of that I doubt you'll see it at all.