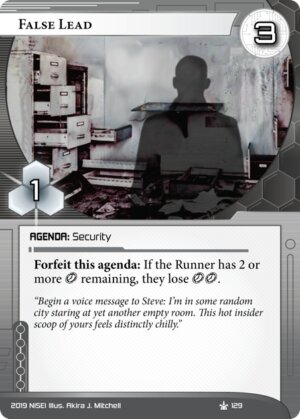 Forfeit this agenda: If the Runner has 2 or more click remaining, they lose clickclick.

"Begin a voice message to Steve: I'm in some random city staring at yet another empty room. This hot insider scoop of yours feels distinctly chilly."
Illustrated by NtscapeNavigator
Decklists with this card

This card does not get enough love. Let's talk about just a few of the wonderful things forfeiting a Falsie can do for you:

It's hard to be a disposable 3/1 agenda in the game of Netrunner, but False Lead more than pulls its weight.

(The Underway era)
Chuftbot 821
Basically any strategy that comes with the caveat "of course, this only works if they choose to run on their last click" becomes a hell of a lot more reliable with False Lead sitting in your score area. — LordRandomness 21 Jan 2016
This could simply be used to chunk an especially important turn for the runner. Use it after their first click to leave them one left. Are they now going to run last click vs your argus? They can't clear the tag (get scorched), and if they steal that agenda you'll hit them with punitive for total 4-5 damage. If they back off, you score the 2-3 point agenda, meaning you essentially forfited False Lead to "upgrade" it into a bigger agenda. — ChairmanHiro 22 Jan 2016
I...think I just realized that this doesn't work on the Runner's third click to deny them their fourth one. Since they're unable to lose two clicks, nothing happens. That means you can defend against a lot of it by running third click? — LordRandomness 27 Jan 2016
New Angeles Sol + Victoria Jenkins + Enhanced Login Protocol + Forfeited False Lead = temporary lockout — sayonara 17 Feb 2016
Cough cough Ryon Knight Cough. — H0tl1ne 9 Apr 2016
3

Odd card. It looks like a single-use agenda which sits idle most of the game. In actuality, it's a value-over-time agenda which restricts the runner's options every turn it's available and one of the few agendas I'd happily bankrupt myself to score early. Scoring 1-2 False Leads makes everything else you do as a corp much stronger because any run could bring on a game-losing Hard-Hitting News they won't have the clicks to clear. Alternately, the Border Controls you're already running in Weyland (or a spicy Anoetic Void) may be able to leverage a False Lead into scoring a winning 5/3 in a window that doesn't otherwise exist.

So FF wanted to include a neutral 3/1 agenda in the new core set, which is probably a reasonable goal given that Core Set 1.0 HB was forced to have 1 more agenda point than it needed, which was poor game design. In general having an extra 1 pointer just gives new players more flexibility, which is probably the point.

There were 4 agendas they could have chosen from, assuming they didn't want to design a new card: Veterans Program, Profiteering, Chronos Project and False Lead (original page with reviews).

Veterans Program is too niche, and 2.0 includes Elizabeth Mills anyway.

Profiteering I would have preferred to False Lead. I think new corp players would have liked to have the credits trading that for essentially giving the runner 3 credits every turn thereafter. Until Lizzy comes along anyway. Certainly it's not overpowered, but FF decided False Lead was preferable.

Chronos Project would have been my pick for sure, but was probably excluded due to FF considering it OP going forward. I suspect they want the runner's heap to be more involved in the game and don't want the corp to have a blanket way of removing it from the game. Shame though, I'll miss it.

So that leaves us with False Lead. The card that won out. The original page gives a list of possible uses. In core set the best use would be in HB to stop the runner from clicking through to score even more points, but I still think that's a niche case for 3/1.

Beyond core set there are better 3/1 agendas for this to be in any way relevant. I guess FF though this was the only option for this slot in the set, and they are probably right, but for players new and old it's mostly irrelevant. For new players, only include it if you need the 1 point to make the minimal agenda points for a valid deck, and buy a datapack with better agendas as soon as you can.

(Crimson Dust era)
CascadeHush 60
Oh, I think it does have it's role in Core Set 2.0 only beginner games. Just tag the runner during the run with a Hunter or Raven, then False Lead away their clicks so they can't remove the tags and scorch them. This agenda basically says 'run 2nd click and I kill you' in Weyland, which is an okay effect for a Core Set card. It teaches you to watch your clicks and be on guard for killing options. — Krams 19 Sep 2017
I'm an idiot and Scorch has rotated, just ignore me :D — Krams 19 Sep 2017
But Chronos doesn't rotate yet, it's from the lunar cycle. And I think that the use of "you can't take that tag out unless you're in clic 1" can be nice even if the only fear is to Close Accounts or your resources being dumped. — valerian32 19 Sep 2017

I'm going to say this now: This is my favorite agenda. You might be thinking, "Corporate Sales Team gives me money, The Future is Now gives me a free tutor, Chronos Project wins me the game! All this does is make the runner two measly clicks!" It does make the runner lose two clicks, but they are far from measly.

Jemison Astronautics: Sacrifice. Audacity. Success. can two of these to explode into a Government Takeover.

SYNC: Everything, Everywhere or Argus Security: Protection Guaranteed can turn a Hard-Hitting News into a deadly gambit.

Jinteki: Personal Evolution or Jinteki Biotech: Life Imagined might use this to prevent drawing cards after an unlucky Snare! access.

Haas-Bioroid decks might use this to make their ICE sting even more.

Overall I think this is a great agenda and has a multitude of uses.