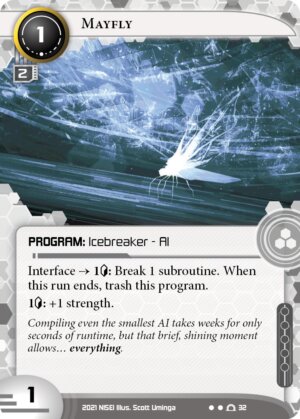 Compiling even the smallest AI takes weeks for only seconds of runtime, but that brief, shining moment allows... <strong>everything</strong>.
Illustrated by Scott Uminga
Decklists with this card

This card is brand new but I'm going to pretend that I only have a mayfly's lifespan to write a review! So here are my initial impressions of Mayfly after jamming a bunch of casual games.

Mayfly is the AI Icebreaker out of System Gateway, replacing the old standard Crypsis, and I think a replacement was much needed. I recently have played some System Core 2019 games and watching the Runner install Crypsis was too painful. It was such a tempo hit to install and use! Mayfly trades off this cumbersome cost with a one-time use effect. I think this design is inspired, showing new players that the strength of the program doesn't matter, as long as it gets you into the server. As an introductory AI icebreaker, Mayfly is a handy tool that will teach new players the fundamentals of the game as they play.

In a competitive sense, I actually think Mayfly has a lot to offer. People have talked about its synergy with Kabonesa Wu and Flame-out, which certainly seems strong. But even in other decks, I think Corps would do well to worry about this little guy. The ability for the Runner to turn a sum of money into an access, no questions asked, is not to be underestimated. I have already had several games where I felt safe rushing out behind two pieces of ice, only to have a Mayfly and a handful of credits ruin my plans. Mayfly will surely have a place in decks looking to land critical runs, such as those using Apocalypse, but I think it may be more generally useful in the early game to keep Corps honest. I kind of live in fear of this bug.

So I guess my message is this: Remember the Mayfly! An install and an Overclock could be all it takes to break a critical early-game advantage, like an Atlas counter or an ARES score. I think Runners should consider slotting one of these, as it can be helpful at all stages of the game, if you have the credits.

I wasn't really a fan of single use breakers back in the Faerie days, but Mayfly fits the System Gateway decks really well, and is more powerful since it can smash through any ice type.

It can be a surprise to the Corp when they think they're safe early game (maybe behind a single ETR barrier or whatever), and even late game with support from econ cards like Overclock or Leech. Even the mental factor of the threat of Mayfly can stop a tentative Corp from rushing an agenda they otherwise would feel safe going for.

Downside is you might be tempted to just rely on Mayfly usage instead of setting up the rest of your breaker suite, so it can lead to poor tempo if you're not paying attention (such as installing and running with Mayfly on a turn that doesn't pay off, and then being a "proper" install behind).

Also in terms of the name and art I think NISEI did a bang up job. Simple and effective drawing, and you basically immediately know what the card will do from the name alone. Solid quote is just gravy.