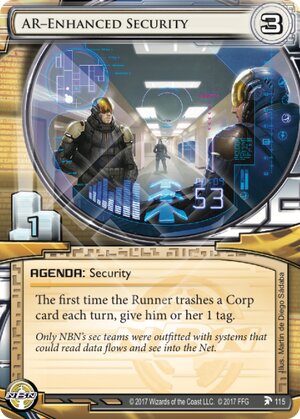 The first time each turn the Runner trashes a Corp card, give them 1 tag.

Only NBN's sec teams were outfitted with systems that could read data flows and see into the Net.
Illustrated by Martin de Diego Sádaba
Decklists with this card

Hope you enjoy playing against Asset Spam because they are here to stay. While lately HB has been tearing up the meta thanks to a few broken cards, other factions also have their fair share of success with going horizontal. The deck which won worlds last year was a CTM deck after all. And while they are not as popular (something I still don't entirely understand) as they once were, AR-Enhanced Security is definitely going to help them out.

The idea is quite simple. Once you have this scored, the runner takes 1 tag the first time they trash a corp card. My first thought when reading this card was, "Christ almighty, even more reason to stay clear of assets." But it says, any corp card. ANY CARD. And also anywhere. It is even better than Controlling the Message's ability in this regard since there is no trace and the card does not have to be installed. Run a Parasite ice destruction deck? That triggers this agenda. Want to trash that BOOM! in the corps hand? Take a tag. Do an RD deep dig and get rid of a Jackson Howard so you can go even deeper next run? Take a tag please. And while the tag can be avoided by cards like NACH, there is no trace involved, so decks which historically were hard counters to CTM such as Rabbit Hole Kate or Andromeda don't help you out against this.

So this effect is super powerful, it must be on a 4-2 agenda, right? Wrong, it's a 3-1. These types of agendas are obviously terrible for density purposes, but remember NBN can easily fast advance this out. And an early score of one of these means pain for the remainder of the game. Worst of all, this agenda stacks. Have fun getting rid of a Sansan (which is a must trash), only to be burrowed in tags. It's kind of ironic that NBN is the faction with absolutely meh 4-2's such as Escalate Vitriol or Character Assassination but then they get one of these as a 3-1...

There are obviously a few counters against this agenda. The most obvious one is the new Tag Me anarch archetype, which revels in the amounts of tags they get. I imagine they might become more popular in the coming months. There is also Salsette Slums, which saw a lot of play a while ago but has fallen a bit out of grace. There is also Jesmi.. who am I kidding, she will never be relevant. You could always ignore the corp's plan and just hammers centrals, which against CTM especially people often did anyway. But this kind of hail-mary strategy is always somewhat desperate and with the speed a faction like NBN has, I don't know how viable it will be.

Anyway, I really don't understand why this had to be made, and a 3-1 agenda no less. Even on a 4-2 this would be extremely powerful. Guess Asset Spam is the direction FFG wants to take the game. May there be mercy on man and machine for their sins.

This agenda is oppressive.

If it is scored quite soon in the game, the runner immediately looses the ability to keep the assets of the corp in check. I mean, which runner card gives 1 extra click and 2 extra creds per turn?

And the ability of the agenda stacks, so it becomes an impossible situation where the runner can't touch the corps assets...

3/1s are usually unplayable (they're not efficient for getting agenda points and dilute your deck with agendas). The 3/1 agendas that get played either need either a great ability or an excellent interaction with a popular ID(s) to work. AR-Enhanced Security has both.

AR-Enhanced Security's ability is thoroughly excellent. It's a straight improvement on Controlling the Message's ID ability, which has been among the strongest corp IDs for years. CTM traces for a tag if an installed card is trashed. With ARES, a tag always hits (no trace) even if the trashed card isn't installed, making it better against Stargate and HQ/RND destruction. Along with CTM's ability, this is one of the most reliable effects to jack up the price of trashing assets so high that many decks can't keep up.

Runners right now have a slew of options for dealing with trash costs (e.g. Miss Bones) or bypassing trash costs altogether (e.g. Stargate and Imp). AR-Enhanced Security is a major reason that asset-centric decks are still an option out of NBN, though not as strong as in years past.

Your first ARES scored will probably inflict 3+ tags for a direct impact of 9+ credits. In addition, there are uncountable benefits like the cards NOT trashed and the runs not made because the runner is afraid. If your deck gets any value out of tags, there will be many situations where scoring this is a good use of your time, even though it does make deck composition clunkier compared to 3/2s and 5/3s. There will also be games where this lands the winning tag(s) and plays a crucial role winning on tags. As far as tag-dealing cards go, this is more reliable than most.