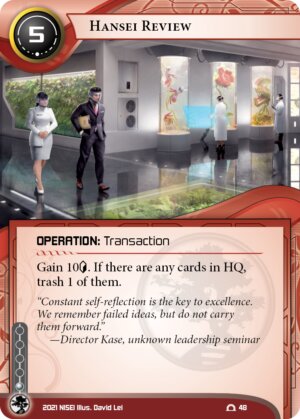 Gain 10credit. If there are any cards in HQ, trash 1 of them.

"Constant self-reflection is the key to excellence. We remember failed ideas, but do not carry them forward."
—Director Kase, unknown leadership seminar
Illustrated by David Lei
Decklists with this card

Jinteki has an interesting relationship with economy. They have some real powerhouse econ cards, but they also also tend to give the corp some kind of disadvantage, and then challenge us to build decks where that penalty is minimized.

Well, Hansei Review is another one. Strictly by the credit amount, it's a Government Subsidy that only costs 5 instead of 10 to play. But it has that little condition, about having to trash a card from HQ if possible. Or, another way to think about it is that it's a Hedge Fund, that gives you +1, and -1 card draw.

It's possible, of course, to get around the trashed card by playing it when it's the last card in HQ. But generally it's harder for corps to empty their hands than runners, so this isn't always practical unless you're actively discarding cards. (Which DOES give it an interesting possible synergy with Anoetic Void...)

But all of that is assuming that you don't want to put a card in archives. If you find yourself with too many agendas, tossing a card might be exactly what the (spin) doctor ordered. And of course, there's the new Jinteki identity, Restoring Humanity, that really likes having a facedown card in archives at the end of their turn. Honestly, they seem like the ones that Hansei Review was probably intended for. It's a better Hedge Fund, that also turns your identity back on if the runner has been checking archives.

All in all, an interesting econ card. Probably not worth playing if you don't have some way to benefit from trashing a card from HQ. But if you do, it's basically a better Hedge Fund.

Hansei Review synergize with Subliminal Messaging, because you can trash the latter and get it back after.

That's a good point! Those two do make a nice combo together, don't they?