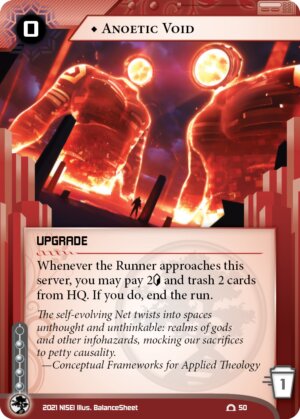 Whenever the Runner approaches this server, you may pay 2credit and trash 2 cards from HQ. If you do, end the run.

The self-evolving Net twists into spaces unthought and unthinkable: realms of gods and other infohazards, mocking our sacrifices to petty causality.
—Conceptual Frameworks for Applied Theology
Illustrated by BalanceSheet
Decklists with this card

Okay, TL;DR version: This card is a powerhouse that will almost certainly play a role in shaping the meta for glacier decks for the foreseeable future. There is zero question in my mind that this will be showing up in tournament-winning decklists, so if you're not already familiar with the card, start getting used to it and start learning how to play around it.

There. Now that that's out of the way, time for the rambling wall of text. Because this is a really interesting card, and there are a lot of aspects to cover!

These are common enough words in Netrunner, of course. Except, here, unlike most other places they occur, it has no special conditions that need to be met. Once Anoetic Void is online, the runner can't contest it. There is no trace to beat, no ICE to break, not even a psi game to luck out on. Just those three, short words. The corp pays for the effect, and the run ends, and that's that.

This card clearly exists to fill the void left by dear, rotated Caprice Nisei, so it makes sense to compare the two. A quick rundown:

That last point is probably the most important. With Caprice, there was always a chance that the runner would guess right, and get in. Countless games of Netrunner have been won and lost based on whether Caprice could outguess a runner at match point. Anoetic Void removes the guesswork: If you can pay the cost, you can keep the runner out, 100% of the time.

And oh what a cost. Two credits and two cards is a lot of tempo for the corp to give up! This is no Caprice Nisei, who can sometimes get away with bouncing the runner for 0. When you trigger Anoetic Void, you feel it. The cost increase is definitely a nerf over what Caprice was. (But that's probably okay, because what Caprice was, is borderline too-good.) Is the new cost still worth it? That depends an awful lot on exactly how much it costs to run the server, and how much you need to keep the runner out for a turn, but probably yes. This is still a very powerful, very uncommon effect, that improves glacier builds dramatically.

Because it acts as a cost multiplier, Anoetic Void is at its best when the server it protects is expensive to run. It's hard to say exactly how much 2and 2 cards are worth to the corp, (and depends a bit on exactly which cards they have available to discard) but you probably want a server that costs the runner at least 4-5 to get into. (Or the expenditure of limited resources like Inside Job or Overclock!) Ideally you want to put this in a scoring server with at least 2-3 moderately taxing ICE.

Of course, ICE isn't the only way to make a server more costly to run. Manegarm Skunkworks is a great addition to Anoetic Void, in much the same way that Ash 2X3ZB9CY and Caprice Nisei used to be best buddies. And if I understand the timings right, since they share the same trigger, the corp gets to decide the order that they resolve in. So even if the runner gets past all of your ICE, the corp can force them to pay the Skunkworks tax, and then bounce them with Anotic anyway!

Also - Anoetic Void's cost is high, but it is also far more reliable than a psi game. The corp can look at their resources and KNOW (as much as the corp can know anything, in a world full of runner surprises!) how many times they can fire Anoetic Void in a turn. With Caprice, if the corp had more than zero credits, there was always a chance that the run might fail. You could play some games if the corp had 1-2 credits (and you could afford to run multiple times in a turn) but for the most part, Caprice caused a lot of uncertainty for the runner. And for the corp as well! Because even if your server was great, and you had a 10 lead over the runner, there was always the chance that they'd guess right, and get in anyway.

Anoetic void though, is easy to predict. Both the corp's credit pool and cards in HQ are public information, so the corp and runner can look at both, and generally know how many times the corp can afford to keep them out of the server. If the corp only has 3 cards in hand, and you can afford to get into the server twice, then you can be pretty sure that Anoetic Void is only going to go off once.

This also offers some hints into how the runner might play around this card: If they can force the corp below 2, or below 2 cards in hand, then Anoetic Void is neutered. Criminals then, can try to get past the void via economic warfare, and forcing the corp to lose or respend money via things like Emergency Shutdown, Tranquilizer, Tread Lightly, or Diversion of Funds. Anarchs, of course, can attack the corp's cards in HQ, with effects like Imp, Edward Kim, Freedom Khumalo, Carnivore, and so on.

(Shapers don't really have a good answer I can think of other than to build a big enough rig that running repeatedly on the void is cheap enough to be economically feasible.)

So! Some combos and synergies to think about!

And one last thing - can we just take a moment to appreciate the artwork on this card? BalanceSheet really knocked it out of the park here, with the tiny runner looking out over the strange region of netspace populated by massive digital entities. It is both gorgeous and evocative. Which is good, because I suspect we'll be seeing a lot of this card in glacier builds from here on out!

"BalanceSheet really knocked it out of the park here, with the tiny runner looking out over the strange region of netspace populated by massive digital entities." That's not a runner, that's Caprice Nisei. She got HELP

Exceptionally powerful. This is arguably an improvement on Caprice Nisei, a legendarily effective card. Anoetic Void locks down a server with trivial support. Virtually any 2 ice, or any ice + Manegarm is mostly unrunnable unless the runner is so far ahead they can spend 8+ credits and a click to cause the corp to lose 2 credits and 2 cards of his choice. Board states this hard to interact with aren't usually this cheap to set up.

*Previously, hard "end the run" effects have been mostly limited to a top-tier agenda and a top-tier trashable ice, both of which can only be used once. In comparison to that, spending 2 and trashing 2 HQ cards for a repeatable ability is MUCH lighter in cost. (The cost is somewhat higher than with Caprice Nisei, but Nisei only delivers a 2/3 chance of ending the run).

I guess that "once per turn" statment would be an ok nerf for this. But... maybe if it's nerfed it wouldn't see play. When it was spoiled I remember that there was in the design team discussion about if it was 3 cards the price or something like that and they didn't go with that.

If the corp puts a Void on HQ they're absolutely asking to be milled to death, I would run it every turn and I wouldn't even care about not getting in. The reason it works on a remote is because it's pr

Oops, forgot that enter doesn't start a new line here! The reason it works on a remote is because it's protecting the corp's chance of scoring next turn. If it's on HQ, the only way it's protecting them from winning is if they're a FA corp, and FA corps need those cards in hand.

I think most runner decks generate something like $60-100 over the course of a game. I think spending $8+ and a click to make the corp lose $2 and 2 cards of their choice is not enough value for the runner.

It's also two clicks for them to recover the lost cards. In some circumstances you would still DooF a corp in a situation where it cost you more money to get in than you gained, so I think you would also Void them then.

But... if the corp feels losing the cards and $2 actually is problematic, they can choose to let you through. If the worst-case option is that the runner has to pay $8+ and a click to trash AV in a run which wasn't otherwise valuable, I think the corp still takes a major advantage on this play. Particularly if the Corp has other Anoetic Voids in his deck or HQ.