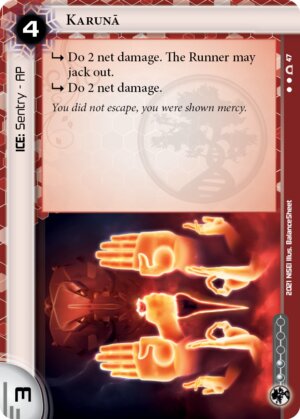 subroutine Do 2 net damage. The Runner may jack out.

You did not escape, you were shown mercy.
Illustrated by BalanceSheet
Decklists with this card

Borderline playable. It's expensive for an ice which is rarely lethal early and doesn't hold up well against most common killers late-game. Jinteki decks tend to run slower and poorer than most other factions, and $4 will be a problem for Jinteki more than anybody else. For an extra $1, you can get a Saisentan which is frequently lethal on early facechecks.

This ice could do great things with the right cards. E.g. back when Mushin No Shin was legal, installing Karuna on a Mushin'ed card (especially a SSL Endorsement) would have been a high-value turn 1. Without powerful support like Mushin, Karuna costs a lot of $ for an early-game ice. Jinteki doesn't have a lot of cards I'd want to protect early with a Karuna, and those cards usually work better with Whitespace or Vanilla. Turn 1-2 Rashida loves Whitespace.

In my experience, Karunā is more about protecting centrals early than protecting remotes only. I agree that it's only borderline playable, though (even though I have it in one of my best decks – it's hard to find good early defence in Jinteki).

For early game chaos, I'd suggest Komainu and Saisen-tan. They're a more devastating face-check and hold up better against Boomerang and Botulism. Or, in lower-econ setups, Aiki is extremely cost-effective (but not strong enough to scare away Stargate or Diversion of Funds without help).

I agree that Saisentan is better, but three early ICE isn't normally enough. Komainu has rotated, sadly. So Karunā is often the next-best option. (Aiki is an interesting idea, but it's a card that can easily become a liability later in the game.)

Anansi means that runner don't usually facecheck Jinteki without a killer. So I think the narrow use case here is early in the game when you can't rez a spider. Would be much more playable as a code gate or barrier, but probably not thematically appropriate.

Iconic ice for Jinteki, reflecting the philosophy of the System Gateway meta : facechecking an ice does not lose you the game, but it will cost you something.

At 4 to rez, it has an impact. But it will slow down the runner.

The art is awesome and it fit so well with its quote. Great design.