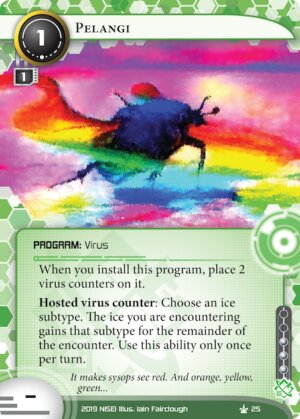 When you install this program, place 2 virus counters on it.

Hosted virus counter: Choose an ice subtype. The ice you are encountering gains that subtype for the remainder of the encounter. Use this ability only once per turn.

Pelangi is the poor man's Laamb or Engolo (now one banned in the MWL and the other restricted).

It allows the runner to facecheck ice easily and go through in a pinch. That's the job (ideally) for an AI, but there is AI hate ice (like IP Block, Swordsman or Chiyashi. The fact that those icebreakers are banned or restricted is that they are inmune to this kind of ice.

So the idea es that you have, your lonely Corroder, a Bukhgalter or a pumped Study Guide and a handful of creds and you can run wherever you want because you can make the corp rez expensive ice and don't be harmed by a DNA Tracker, or a Fairchild 3.0 or even Mythic ice or traps because you can break it with money and a counter from Pelangi.

The basic card of this idea is Tinkering but Tinkering cost you a clic in the same turn that you want to run so it's usually slower than pelangi that can be used twice (even if it's once per turn). Even if you spend a memory slot it's worth it becaause if you're running only one icebreakers at that moment you have space in your rig! Also yes, you may be telegraphing the corp "I can go through your ice" but it's like being a criminal that can play Inside Job.

Even if it's shaper it can be exported to a anarch deck because Freedom Khumalo: Crypto-Anarchist wants virus countes and Knobkierie can provide them. It has been used even in the world's champion deck of this year 2019.

If you don't want to use an AI such us Squirtle-Blastoise, Atman or Eater this card can help you.

Also there are a couple of virus hate cards from the corp pool such us Cyberdex Virus Suite, Macrophage or Reverse Infection that if virus get too prominent they can keep the runner in check. Including this card.