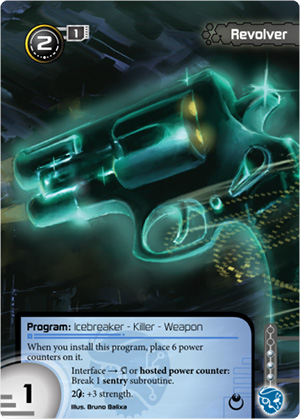 When you install this program, place 6 power counters on it.

For a card without any flavour text I love how this is full of flavour. The 6 power counters beautifully represent the 6 bullets in a revolver chamber used to hip fire those sentry subroutines into the dirt. However, the observant among you will notice that Revolver is actually capable of breaking 7 subroutines, the 7th of which would cost trashing the breaker entirely.

I like to think of this as the final last stand of the runner, having run a gauntlet of sentries they find themselves face to face with the) spider god... Bang two legs fly off as the beast writhes in pain... Bang a shot right to the abdomen, only one more shot required to bring it down... Click... Click-click... With sweat pouring down their face the weary runner checks to see that the chamber is empty. They know there's only one thing for it. Flipping the gun around to grab the barrel as if holding an axe, they line up the final "shot". With a visceral scream they launch the revolver directly towards the leering foe.

Thonk The dull, machined metal lodges itself in the arachnid's chelicera, collapsing it to the floor with a fainting hiss.

So, at the time that this card is coming out, we don't know a whole lot about what Borealis will look like as a whole. We don't know what other Killers will be in there, we only know one sentry (Anemone) and we don't know if there's anything waiting in the wings to play with the "weapon" subtyping on this, which is purely flavor at the moment of this writing.

What we do know is that, at this moment, there is one Gold Standard killer, also in Crim (the home of great Killers), by which all others must be judged. Bukhgalter - it's efficient, reasonably costed to get down, and much like Discover™, it's the Card that Pays You Back! So how, indeed, do these two cards compare?

Based on the pure numbers of how much it costs to break a given sentry with both cards operating on their own best lone potential... Revolver holds up really well, actually. Against all but 2 Sentries in the current Startup format, Revolver is equal or cheaper on credits when compared to Bukhgalter. In some cases, it's much cheaper - if you find yourself facing down a Tyr or an Archer, you'd probably rather pay 4 than 7 to get through them unharmed. And for the 2 exceptions - Swordsman and Anemone - well, first off, I'm not sure anyone has run Swordsman for years, but more importantly, each of them cost 2 to Bukhgalter's 0. Not nothing, but not the biggest downside either.

The real conversation between these two is a little more about incomparable traits. Bukhgalter's downsides are that it costs one more to install than Revolver, it costs more influence to import it, you're getting a rebate rather than a discount with it, meaning you still need to have cash on hand, and the rebate only works once per turn. Revolver's downsides are that it breaks 7 subs, total, and with that seventh sub (already known as "throwing the gun at them") it trashes.

The truth is that in an ideal game, you'd probably want to have both of these out, but that scenario is unlikely until Glacier makes a big comeback. decks that are likely to hit one sentry per turn are still going to be better off with Bukhgalter. Decks that like to make a LOT of runs in one turn will prefer Revolver. As a result, this card might end up seeing more play in Shaper than in Crim, especially with Deep Dive encouraging the Big Turn playstyle and having Simulchips and Harmony AR Therapy in-house.

And now we have our Captain and his boat to recover the power counter!

An unfortunate return of the Weapon subtype (Unregistered S&W '35), hopefully we do see this subtype more. Good Art, Cool Mechanic, Flavor Fail. Should have either been 5 counters + trash, 6 counters no rash, or name it something else.

Oh, I think it's intended. I mean, the idea is that you have 6 bullets and then you throw the revolver itself.

I was just about to say, it's a six-shooter because it has six bullets.