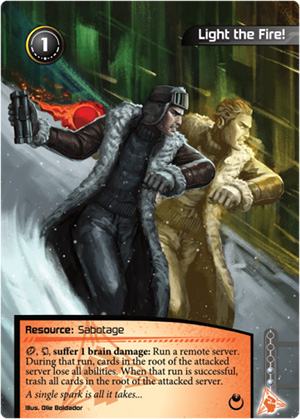 A single spark is all it takes...
Illustrated by Olie Boldador
Decklists with this card

So this is another way to write Stimhack, a classic old card. Now we have 2 options. This one and Overclock.

Stimhack had a fit as a 1 of to do that run where you're in late game and you know that's the winning agenda and gives you 9 . Also found a place in shaper decks because those 9 bucks cans be used to install stuff mid-run with Self-modifying Code (SMC).

So for those shaper uses they made Overclock, just 4 credits asking just for 1 to trash whatever you need to trash, have a little push in that run or use SMC if you're a shaper. No brain damage so it's less money and more accessibility so you cans put it in System Gateway.

But there was a part that was missing. Something impactful with the brain damage. There was something cool about self-inflicting damage. Something very anarch. As the Joker said in the AI generated script for a Batman movie "You drink water. I drink anarchy". And there is few ways better than drinking anarchy that some self brain damage.

So instead of a event it's a resource. So instead of 0 and 1 you will need 1 and 2 that you can divide in 2 diferent turns if you want to telegraph the corp "this is the deal, what are you going to do about it". What gives you in exchange? Depending on the board state.

This cards counters some stuff like Anoetic Void, Manegarm Skunkworks, Prisec and the advancements of City Works Project. So the main idea is to get a server full of stuff out. That trap? on the archives. That region that costs 5 to destroy? see ya.

Remember that this trashing happens before you access the cards so if there is any facedown agenda you'll need to go to archives to retrieve it. And some agendas abilities still happen there. Agendas like Obokata Protocol, Bellona, Send a Message to mention a few. Also agendas can be retrieved using Spin Doctor so I recommend to take any pesky doctor before using this.

And for the corp, how to counter it? Apart that from your ice you still have abilities such as Earth Station: SEA Headquarters. For other hard end the run effects... you still have Border Control or Nisei MK II that can prevent for that all thrashing.

Also: remember that the brain damage cannot be prevented (by Heartbeat for example) because it's a cost. If the cost doesn't happen then the effect doesn't happen. (it's like when you cannot prevent the net damage if you decide as a runner to steal Obokata Protocol)

I wonder if Lucky Charm will see some life to counter the counters to this card.

That would be cool!

Great value against upgrades, high-trash cost assets, and traps. Trashing a Manegarm normally costs $8, accessing Ganked can be catastrophic, and Anoetic Void can completely shut down some key lines of play, and a lot of grids are costly to trash. Performance Design might have a Manegarm and a Tranquility Grid out on turn 1-2, and if you're not Lighting a Fire Up in This Piece it'll be $12 to trash (plus any ice-breaking) against $3 to rez. You're a punk rocker working at a MegaBuy in Communist Russia, nobody has $12 on turn 2, just grab a molotov and hopefully you'll get there before the Border Control does.

Moderate value against defensive agendas. Trashing a City Works Project makes it much easier to steal. Trashing an Obokata or Bellona at least prevents the Corp from scoring it.

Problem: in the PD matchups where this card is probably the most needed, the Border Controls they're already running are a hard counter. If you give up a $1 Light the Fire and a brain damage and they give up a $4 Border Control, they're probably coming out ahead on the exchange.