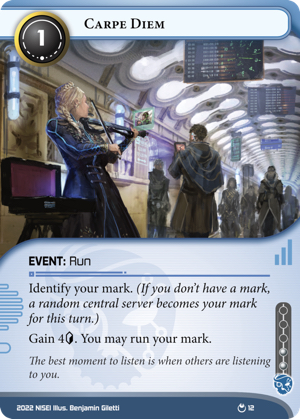 Identify your mark. (If you don’t have a mark, a random central server becomes your mark for this turn.)

Gain 4credit. You may run your mark.

The best moment to listen is when others are listening to you.
Illustrated by Benjamin Giletti
Decklists with this card

The most obvious comparison for this card is the ubiquitous Dirty Laundry. They're both econ cards disguised as run events. They both give you net 3. But while Dirty Laundry lets you pick your target and efficiently earn money while also running places you want to run, Carpe Diem only lets you run on a central server. And if you don't have other mark cards in play, you might not even know which one before you play it!

Now it's not all bad news. Carpe Diem costs 1 less to start than Dirty Laundry, and more importantly, gives you the money before the run instead of after. (Meaning that you have use of it during the run.) So this almost makes it more akin to Overclock or something. Except Carpe Diem gives you real money you can keep, instead of temporary credits for the run. (Albeit 1 less.) And finally (this is probably the most interesting bit) Carpe Diem doesn't actually require you to make the run at all! You can just play it and pocket the cash and walk away. So maybe we should be comparing it also to Easy Mark?

Well, maybe not entirely. There is a reason people didn't play Easy Mark. So if you're using Carpe Diem without taking advantage of the free run (A worth of value right there) then you're sorely underusing it. But hey, sometimes you're in a bad way and you really just need 3 for something other than a run!

Overall, Carpe Diem is in a weird place. It has aspects of a lot of other cards (some good, some less so) but it is somehow usually worse than most of them. It lacks the freedom to pick easy targets (and remotes!) with Dirty Laundry, doesn't give you as much money as Overclock, and costs more to start than Easy Mark. It's probably still useful if you're already running a bunch of mark cards. (Specifically resources or Nyusha "Sable" Sintashta: Symphonic Prodigy) because it is "markedly" better if you know what the mark is before you play it. (Sorry, that wasn't intentional, I only saw it when I was proofreading and felt like I had to add the quotes.) For Sable, it's basically Dirty Laundry copies 4-6, since she's going to have enough stacked effects targeting marked servers that she's going to want to be running on them anyway. For everyone else, I suspect it will stay in the binder. Criminal just has too many better run-based-econ options, in my opinion.

Jank shoutout though - if you are playing Sable and using Swift though, assuming you make it in, this card actually gains you , instead of costing you !