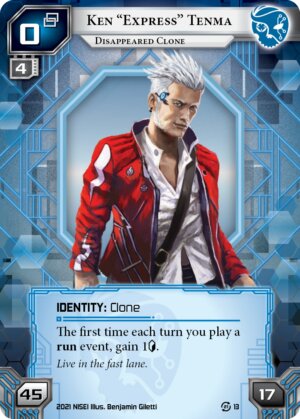 The first time each turn you play a run event, gain 1credit.

Live in the fast lane.
Illustrated by Benjamin Giletti
Decklists with this card

[Story time with H0tl1ne. You Spike-type competitive guys move right along. With that out of the way...]

Clone. Courier. Driving and delivering these packages fast and solid is what they do. Tenma Line, you insufferable duckwad.

True. But is that all there is?

Nope. Far from it, actually. Let's ponder this for a second.

You are in a hurry when the time is scarce. But, being an escaped clone, Kenny should have plenty of time on his hands, right?

The main merit of clones as a workforce is that they are (relatively) cheap to mass-produce, and due to extensive neural conditioning, they are obedient to the point of suicide (obviously the case with our buddy over here. Look at the jacket. Look at the hair. Obedient type all along). Also, simulants are disposable - you can work them to death, no problem. Our corporate policies got you covered - give us your old, wasted clone and we'll supply you with a fresh batch on the spot. For a convenient price, naturally.

As every mass-produced product, clones have an expiration date. It's perfectly logical - immortal clones mean no fresh clones, means no income, means end of business. Depends on the line and its destination, of course. You want babysitters to live longer in order to avoid mental trauma your kids would suffer when the beloved nanny gets recycled. Zero-G workers, miners, reactor meat, no problem, new drop every five years.

For Tenma line the clock is set to fifteen, maybe twenty, we are not sure on that, most got recycled before they keeled over. Kenny might have worked as a courier for a good bit of time now. But he's broken away and made a name for himself as a smooth operator. You don't break the conditioning during one moment of instant wisdom. You don't become a novahot runner overnight. Well, you might, but the name "H0tl1ne" is already taken.

My point being, Kenny comes with an expiration date too. And he's not exactly fresh off the tank.

What would you do knowing when exactly you are going to die?

But there are some benefits to having only several years to live. For instance, cigarettes. Lung cancer will probably kill you in twenty years. But if you don't have twenty years, you're basically immune. So it's all sex, drugs and rock'n'roll, right? Live high while you can, tomorrow you may be dead?

This probably is one of the things that drive Ken. He doesn't have much time, so he turns to a life of a criminal for sake of living his life, brief as it might be, as something worth remembering. That, and a desire to prove to himself and everyone around that a clone can have a better life than most of people do.

Now now, it is the future, you might say. We've got gene goodies that let your heart beat indefinitely and even if it stops anyway, we'll just put in a new one and apply a little voltage. Voila!

That's true. And I know exactly who does such crazy stuff. These guys are called Jinteki Corporation.

Hey, have you heard the term "retire on sight"?

(Intervention era)
H0tl1ne 387
Great read! Still never actually tried a Ken deck but I'm getting into the whole Criminal run event buffet thing. Might have to try it with Ken. — Tirranek 27 Nov 2016
The key to Ken is thinking of his ID ability as more of an additional advantage to help you do stuff than the core of his tactics. You are going to do run events anyways, so relax and take a cred. He's like EtF, but with a cool jacket. — H0tl1ne 27 Nov 2016
Nah, he's got a smokin' hot babe named Randi now. They're goin' to Brazil to live life in a way only freedom allows. — Pink 29 Oct 2017
That from Exodus? Haven't read it yet, is it any good? — H0tl1ne 4 Nov 2017
6

At first, I tried buidling around Ken Tenma because of his looks, more or less inspired from those japanese versus fighting videogames, and his cool ability. He basically rewards you for what you're supposed to do when you are playing the runner side which is hacking through corporate servers. While 1 credit gain seems far from a game changing ability, there's an equivalent no one would discuss : Kate McAffrey ! When you realize some of the most decisive run events (inside job, legwork, account siphon...) are in criminal faction, his ability is nothing to sneeze at. Some very good run events like Dirty laundry, Vamp or Stimhack are also strong in about any deck. So, even if it targets some specific cards (but who does'nt include run events when building ?), you can usually trigger his special and gain a free credit each turn. But he really starts to shine once you realize what you can do with the extra influence ! A lot of options are now open, including high influence icebreakers or programmes like Keyhole (I am currently playing a cool keyhole/dopplegänger/ Notoriety deck) and include cards to surprise your opponent. Things you didn't seriously considered before like The Source now have a little space in your deck thanks to his 17 points.

Overall he really is an excellent runner. I switched from other criminal identities to Tenma, first for the look, and now for what Ken Tenma can bring during the deckbuilding process, the drip economy from his special ability being just the icing on the cake. Hail for the clone, baby !

Not so much an review as an observation. As I am researching possibilities for the upcoming ID Swap tournament, I took a long look at the assigned influence of every identity in the game. To date, 6 years after he was released in Honor and Profit, Ken remains the only non-mini faction (which are a different story due to their tiny cardpool and need to import) runner blessed with more than 15 influence. 17 to be exact. Meanwhile there are 5 corps who have that privilege (3 of which are NBN), while one even has 22. Near-Earth Hub, AgInfusion and Titan were/are competitive powerhouses, GameNET is very solid, while Harishchandra and Custom Biotics are considered garbage. That to me seems to indicate that an ID's influence is less important than its ability in determining power level. So why haven't there been more runner ID's with 17 influence, especially since Ken hasn't enjoyed a huge amount of success?

One theory is that corps inherently need to import more cards to optimize their strategies, be it kill, fast advance or a well-rounded ice suite. Meanwhile, runners can spend their influence more freely, as they tend to have most tools in-faction. Anarchs especially were notorious for this for a long time. Who can forget Hatebear, an archetype that spend 8 or even 12 influence on copies of Account Siphon. Even nowadays, 15 inf identities like Hoshiko and Val have everything they need in faction, allowing them to easily import a playset of Apocalypse or Bravado. Because of this, even lower tier anarchs like Null and Kim are not exactly weak, just worse than their competition. A 45/17 anarch would need to have a terrible effect to not be considered broken, and printing purposely bad identities is not something either FFG or Nisei aims to do.

Mind you, the same consideration could also apply to shapers and criminals, just less so at this point in time. I am not a game designer, but I do feel it might just be harder to balance a runner than a corp in terms of influence. That's why we might not see another 17 influence runner soon, or ever. I am curious to see the mechanic explored further though, and who knows what Nisei has in store.

Yeah that would be interesting!