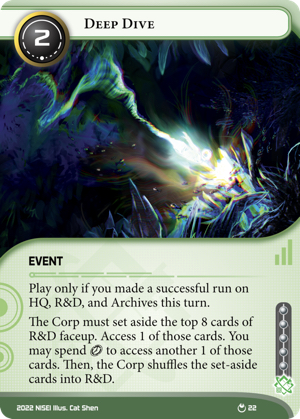 Play only if you made a successful run on HQ, R&D, and Archives this turn.

Illustrated by Cat Shen
Decklists with this card

Whee. Another card of the "run all the centrals to do something amazing" archetype. And this one probably delivers on the amazing part. 8 cards is a LOT, and you get to pick one to access. Or two, if you can contrive a way to run 3 servers, play an event, and still have a click left over!

In a lot of ways, this is a supercharged version of the old shaper staple, Indexing. It gives you a good chance of seeing an agenda, and a ton of information about their deck in the process. It allows you (effectively) a huge multiaccess, except that it completely ignores all the nasty traps and surprises that are traditionally the bane of huge multiaccesses.

Except there are some really interesting differences, between Deep Dive and Indexing. Indexing requires you to run on R&D twice (or more) to get real value, since the first run just tells you what's there, and lets you reorder it. This means that Indexing was usually either a very early game card, (great if they don't ice R&D first turn, or have only one ice that you can break cheaply), or a very late game card. (For when you're rich enough to raid a well-guarded R&D multiple times in a turn.) In contrast, Deep Dive requires you to hit all three centrals. So you're more likely to need more than one breaker type to complete your triple-run. So it's harder to Deep Dive early - it feels like more of a late-game card.

Also, Deep Dive happens all at once - the viewing and the accessing are part of the same effect. So Deep Dive is not vulnerable to instant-speed deck reshuffles that were always the bane of Indexing. It used to be that a well-timed Jackson Howard, (or his new minions, the Spin Doctors) could completely invalidate an Indexing run, but Deep Dive has no such troubles.

On the other hand, Indexing also let you have some control over what the corp was going to draw. Whether or not you managed to scoop any agendas in the process, if the corp was poor, you could move their Hedge Fund five cards down, to keep them poor a little longer. If they were having trouble drawing ice, oops, guess Eli is four or five cards down now. Deep Dive forces a reshuffle, so no such games are possible.

But enough about what Deep Dive does. What it does is amazing. Let's talk about how to best pull it off!

Like most cards that require multiple central runs, anything that gives you free runs or extra clicks is a godsend. Especially if you want a spare for that delicious second card access!

Really, Jak Sinclair seems like the best of these if you're playing shaper. Playing it out of criminal in a Nyusha deck seems possible also, although I'm not sure how the influence would work out. It's a pity that Out of the Ashes just rotated, because that card was perfect for this sort of thing.

Cards that let you get extra value out of runs are also probably worth looking at, as support for this card.

Deep Dive seems like a pretty good card. It's a BIG card - not in credit cost, but in effect and the effort it takes to play. It can can easily end games in a hurry though, if you snipe 1-2 agendas from R&D, along with a lucky hit on Legwork. That's a lot of points in a turn. Obviously it's possible to get bad draws, but you're almost sure to get at least some points out of your Deep Dive turn.

I am guessing we will see this card in decklists going forward, as an alternate win condition for runners. It will probably need at least some portion of the deck built around supporting it, but the effect is powerful enough that I think it will be worth it.