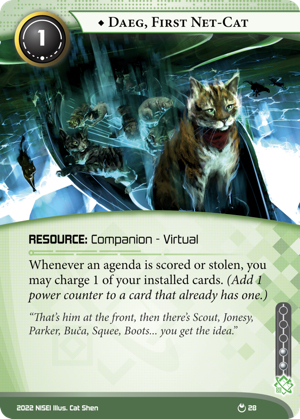 Whenever an agenda is scored or stolen, you may charge 1 of your installed cards. (Add 1 power counter to a card that already has one.)

"That's him at the front, then there's Scout, Jonesy, Parker, Buča, Squee, Boots... you get the idea."
Illustrated by Cat Shen
Decklists with this card

I'm not sure what I think of this card.

On one hand, it's cheap. And it's tempting to run multiples, because it's the sort of card that you want to get rolling as early as possible for maximum value. But on the other hand, it's also unique, so after the first one, the rest are dead draws. (Unless you somehow let the kitty die, like some kind of monster.)

More importantly, I'm not sure if any of the cards that charge up with power counters are strong enough for this to be a worthwhile include. Except, of course, the boat. Boat counters seem valuable enough that even if you only got 2 or 3 counters from Daeg, it's still worth it. I mean, would you pay 1 for a card that just let you break 2 subs on a piece of ice, regardless of strength? I feel like I would. And Daeg will probably let you do that, over the course of the game. (Although that being said, Rejig can give you 2-3 boat tokens right now if you're low, and costs 0...)

It is part of a combo though - Daeg is worthless if you don't have the boat on the board, and at an eye-watering 8 boat-fee, (boats aren't cheap!) you may not get full value out of Daeg. (Although it's worth remembering that even if you don't have a boat yet, he can let you stay longer in expensive hotels.)

Still though - boat tokens are super good, and so anything that can give you multiple tokens is probably worthwhile, even if it is part of a combo. And it is a kitty. What are you going to do, just... not put the kitty in your deck?

GNU netcat is one of the foundational networking tools that IT uses to setup, configure, and test networks. Cute reference here.