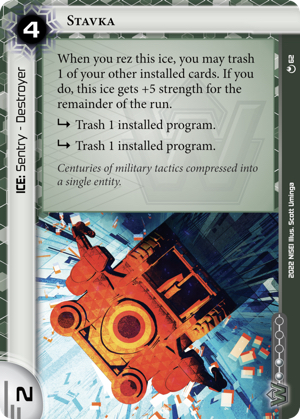 When you rez this ice, you may trash 1 of your other installed cards. If you do, this ice gets +5 strength for the remainder of the run.

Centuries of military tactics compressed into a single entity.
Illustrated by Scott Uminga
Decklists with this card

Stavka is a contender for best destroyer ever printed.

4 credits for a 7 strength, two sub destroyer makes you question what you were ever doing playing Rototurret, and Rototurret has seen a fair amount of play. It's similarly tough to facecheck as Archer, but doesn't constrain your agenda suite or put you behind on points the way Archer does. The "trash a card" downside is real but does enable some neat finesses, like trashing an agenda that you would otherwise lose. If you're playing Ob Superheavy, the trash ranges from "mildly inconvenient" to "enables game winning shenanigans." Players will note that this is answered by Boomerang, but what ice isn't? The trash is optional, so you can let the runner pop the Boomerang even if you don't trash anything. Despite being a mediocre ice for taxing on turns after the rez, I think that this is so powerful that this will see play in other IDs and out of faction.*

First, the conspiracy breakers. Trashing Clippy is an annoying 4 credit tax on the runner, but won't win a game by itself, and until it either rotates out of standard or gets banned, everyone and their dog will probably be playing Paperclip. The full conspiracy suite is less common, and you'll probably have support programs you can smash instead, but this does lose some of its absolute game-destroying potency that you might have hoped to see. The silver lining is that MKUltra is relatively inefficient at breaking it both on rez and on future turns.

Second, the Boat. Endurance very neatly answers this on rez, and it'll be very very hard to try to slam an Endurance runner into Stavka when they're out of boat counters and also don't have money to break with a killer and also have programs you can trash. The boat seems primed to be a serious metagame threat in the upcoming era of Netrunner, and particularly hoses the kind of fast, rush-based play that would otherwise love a big meaty destroyer faceplant.

So, in a vacuum: Stavka is amazing. Premium efficiency ice, capable of winning a game outright, very hard to play around. In a meta where the boat and conspiracy breakers are extremely common, Stavka is probably very sad.

This looks very strong. A 7-strength, $4 sentry will surprise a lot of runners and it looks to be the most reliable program-destruction printed in a long time. This will probably see a lot of play.

I think the card will be unfun, though. Losing 2 icebreakers (or economic programs) is unusually severe punishment on an ice which will usually be a 7-strength sentry on facecheck. In the spirit of not having a game end because you already discarded a backup breaker or you're in a mini-faction that can't reasonably stock multiple copies of breakers/recursion or are just sick of conspiracy breakers, I'd suggest giving the runner a costly option to prevent the program from being trashed. "Trash 1 installed program. The runner may suffer a brain damage to prevent this", something like that.

I think that you have in each faction something to face this. In criminal bypasses, boomerangs. In shaper you have simulchip by default (and now a boat). In anarch you have bin breakers and botulus. It's definetly something to take into account.

I think the real lesson here is that maybe runners SHOULDN'T discard their backup breakers. Rigs are a lot less safe these days, and runners should probably play as though they will need to replace some breakers at some point during the game. Whether that means stocking up on simulchips or just keeping backups in hand, program destruction is a thing that is going to happen sometimes.

I agree with the two above me, Stavka is good, but not OP

I agree with the two above me, Stavka is good, but not OP. If you're going to lose the game cause you get a program trashed then you aren't playing well. Redundancy is key ;)

I don't think it's overpowered/underpriced, or that it's exceptionally hard to prevent it from landing, but it is unusually severe when it lands. "If you're going to lose the game cause you get a program trashed then you aren't playing well" - redundancy comes at some cost, and it's a higher cost for some factions. Take Adam, for example. He's desperately low on influence and often has only 1x of each breaker and probably less recursion than most. But, I think for most runners not on conspiracy breakers, losing 2 programs is a major setback even if you have a replacement for one of them in hand. If you're trying to find 1-2 remaining copies or a Simulchip from your deck, that'll probably take 10+ draws.