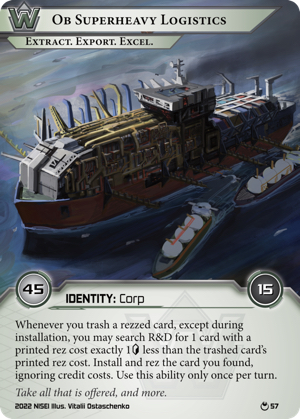 Whenever you trash a rezzed card, except during installation, you may search R&D for 1 card with a printed rez cost exactly 1credit less than the trashed card's printed rez cost. Install and rez the card you found, ignoring credit costs. Use this ability only once per turn.

Take all that is offered, and more.
Illustrated by Vitalii Ostaschenko
Decklists with this card

So I think this card exists so that people who like to make ridiculous decks have something to obsess over. It has a very powerful effect, but it's not immediately obvious how to make it useful. And I'm not going to pretend that I've cracked the code here either. I've made a few decks with it, and they've all been universally terrible.

But I do have a few observations, which will hopefully be of help to anyone trying to make this monstrosity work...

There are probably better sets of cards to do this with. Alexa Belsky is not a card you'd normally want in your deck. It's surprisingly hard to find 1 cost self-trashers though! (Very unfortunate that Mark Yale just rotated.) But either way, the ability to trash an agenda mid-run is noteworthy. And the ability to replace it with something harmful after they commit to access is very interesting indeed.

Reconstruction Contract may be the card you're looking for instead of Alexa Belsky. You can trash to move 0 counters and trigger Ob. Saves influence if nothing else, and spare meat damage from, for example, a random Azef Protocol could potentially power it up.

I'm not sure if Reconstruction Contract can be used with 0 counter, since it does not have the potential to change the game state.

This will probably be powerful, but not as crazy-strong as its early gameplay looks. Yes, Ob can rez an Envelopment for $5, cause the Runner to pay $4 to break/trash it, and then tutor/install/rez a Border Control for free. Later on, they can trash the Border Control to end a run and tutor/install/rez a $3 Maskirovka for free. Their $5 ended up paying for 3 ice (2 installed from R+D clicklessly), BUT in a funky series of pawnings where only one was ever on the table and in the exact opposite order I'd usually want to play these cards. This is an unusual economic flow with lots of on-paper income but I think runners might find reasonable counterplay over time. It might not be much harder to deal with than Blue Sun turning each Oversight AI or Building Blocks into a quick $7-14.

It might be too much ID value, though. Border Control is already one of the strongest ices ever printed and giving it the ability to also find/install/rez a $3 card pushes it into the stratosphere. Even average assets jump a tier or two when they gain 2-3 basic clicks worth of value. Launch Campaign's ability to tutor/install a Rashida takes it from an innocent "3 turns to net $5" to a high-priority "4 turns to net $8 and 3 cards". Ob has an unusually wide array of assets that have much more upside than normal if not killed. (Regolith Mining License, Marilyn Campaign, Nico Campaign, Launch Campaign, MCA Austerity Policy, etc). We're looking at a Weyland ID with an unusually strong card pool of $3-5 ice and much stronger-than-normal $1-2 assets, and a life-changing amount of tutoring flexibility/consistency. This looks like more ID value than most top IDs get, and its card pool is surprisingly flexible.

Reduced Service is a normally fairly weak card which has interesting synergy possibilities. Being able to clicklessly tutor it makes it a lot stronger. Of course, if you can shell out the influence for Anoetic Void there's probably some comedy opportunities to ruin someone's run mid-run.

Installing Anoetic Void mid-run would be hilarious. You could use Stavka to trash a $1 card, or use Alexa Belsky to trash herself.