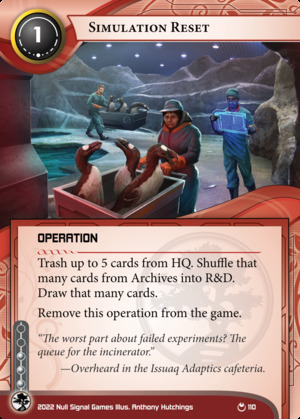 "The worst part about failed experiments? The queue for the incinerator."
—Overheard in the Issuaq Adaptics cafeteria.
Illustrated by Anthony Hutchings
Decklists with this card

In a world where Archived Memories and Preemptive Action were (as of this writing) recently banned for allowing too much corp recursion, this card came as quite a surprise. Especially in light of the collection of strong recursion options that Jinteki has already accumulated.

And make no mistake. At this point, Jinteki is really good at bringing back cards from archives. They've never been bad at it, but it feels like it has been kicked into overdrive recently. Maybe the difference between these and Archived Memories is that these are mostly either high-influence, or agendas, making them difficult for other factions to make use of? Not sure. But whatever the reason, they're here, and worth taking notice of!

So. We're here to talk about Simulation Reset in particular, so let's get to it. On the face of it, it's a good way to cycle up to five cards back into your deck, if you don't like what you're holding. And that's assuming you just take the boring route, and reshuffle everything that you just discarded. What makes this card neat is that you don't have to reshuffle what you tossed - you can reshuffle whatever you want. So you can drop 3 Ice Walls, once the runner has their fracter down, and bring back 3 Hedge Fundss or something, that you know you can still use. Or bring back 3 assets that the runner has already trashed. Or whatever you want. With the ability to reshuffle up to 5(!) cards back into R&D, I think this may well be the most powerful recursion option available to the corp at the moment. (It certainly is in Startup format!)

So this already makes it a noteworthy card in my book. But wait! There's even more!

Because this card gets you another resource as well. One that is quickly becoming very important in modern Jinteki decks: Facedown cards in archives. This is key! I mean, obviously Jinteki: Restoring Humanity likes to have at least one for their drip econ, but whatever. That's old news. I'm talking about some of the newer toys:

All of these really benefit from something that dumps up to five cards of your choice in archives as a side effect.

As a broader trend, I really like the way that Null Signal Games is leaning into Jinteki's historic connection to archives. They've done a really good job of making the runner actually care what's in there, beyond just fishing for stashed agendas. Letting the corp keep archives facedown is starting to open up a lot of potential for chicanery! But as archives have gotten more attention from runners, it has sometimes been hard for corp players to keep the mystery alive. This card is great for that.

As well as, you know, also happening to be the single most powerful corp recursion card I've ever seen. :P

Archived Memories returns a card to HQ to be played or installed immediately, while most of Jinteki's recursion shuffles cards into R&D to eventually be drawn. The immediacy of Archived Memories is part of its power.

Comparing Simulation Reset to Preemptive Action, it should be noted that Simulation Reset draws the same number of cards that were shuffled back, so it does not extend the clock on the Corp. Spin Doctor and Sprint, two other NSG recursion cards, also draw at least as many cards as they recur. The recursion agendas draw the game towards its conclusion simply by being worth points. Game length wasn't mentioned in the ban announcement, but it seems to be on the designers' minds. (In my limited Netrunner viewership, I haven't yet seen a game end by inability to draw, but I have seen games where the danger of decking out forced the Corp to play aggressively.)

I think you are probably exactly right on both of these. The immediacy of Archived Memories, just reinstalling whatever the runner just trashed (or just pulling back an operation to play a second time) is quite strong. And if the corp brought x3 copies of Jackson Howard and Preemptive Action, those six cards could extend the game by up to 18 turns total, which is actually kind of crazy to think about.

Simulation Reset is to Jinteki what Special Report is to NBN, but with the added benefit of pulling cards from archives. With this, Spin Doctor is not as essential to Jinteki anymore. A very good card.

Simulation Reset could be useful for working through a bad draw or situational recursion or maybe mitigating the risk of unlucky R+D hits from sabotage/similar. It's better for working through a bad draw than Preemptive Action had been (or Genotyping is) but worse at extending the corp's lifespan. It also ~requires you to have 3+ discardable cards in hand to be which is fairly uncommon and won't always be the case when you need large-scale recursion. (If you've lost agendas to sabotage, most likely it's because you didn't have cards in hand you could comfortably lose).

It feels unlikely that this will see major use outside of Jinteki. 3 influence is punitive. In Jinteki, it might be useful for stacking the deck with certain situationally useful cards. If, God help you, you have somehow completely exhausted the runner and they're unable to survive another 2-3 net damage, stacking the deck with Snare! or Anemone could significantly affect the runner's longterm options. In addition, if you're in a situation where the runner knows too much about what you have (e.g. because they've seen enough cards with Stargate or you've been overdrawing or making unexpected sabotage choices), this could be useful as a reset button. You are Jinteki, let chaos reign.