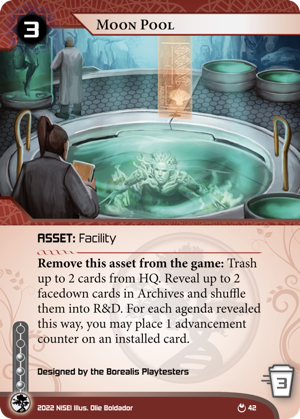 Remove this asset from the game: Trash up to 2 cards from HQ. Reveal up to 2 facedown cards in Archives and shuffle them into R&D. For each agenda revealed this way, you may place 1 advancement counter on an installed card.

Well, this is a crazy bit of Jinteki fast advance tech. Looking at this card, I think the real impressive bit is just how many problems it solves at once.

There are a few drawbacks though.

Overall though, these drawbacks seem pretty workable. Obviously this can work well in glacier decks, where you install it in your scoring remote, and if they break in, great, you just taxed them a bunch, and if they don't break in, you fast-advance out a 4/2 or something.

From the Nisei writeups, I get the impression that this is intended to speed out Regenesis, as a way of sneaking out big 5/3s, and that's probably great. But I think this card also has some serious potential in a standard Personal Evolution thousand-cuts deck.

PE decks will almost always have extra 3-cost agendas laying around, so it will be easy to power the moon pool, and this represents a decent way to speed out the occasional 4/2 agenda they have, when necessary. Also, the runner is more likely to leave unadvanced assets alone in PE, since they're unlikely to be big agendas, and they might be Urtica Ciphers or Snares. And given how cheap the whole thing is, you can do things pretty efficiently. Which is good, since PE tends to run cheap! So having a turn where fast-advance out, say, Offworld Office means that you can gain 2 agenda points, and net 2, in addition to the PE net damage.

Also, one last parting thought: You can use this to advance things that aren't agendas too. While advanceable ice might make for a funny surprise, I think it would be far nastier to use this to power up a Urtica Cipher or Cerebral Overwriter after the runner commits to accessing it.

And let's not forget that Ronin and Clearinghouse also exist...

I think this card has some serious potential. Looking forward to seeing how it shapes up in tournaments!