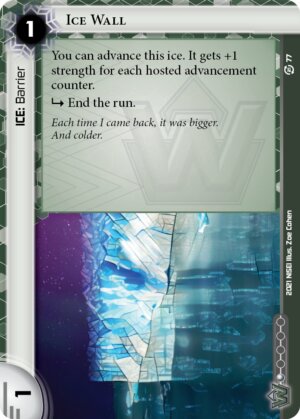 Each time I came back, it was bigger. And colder.
Illustrated by Zoe Cohen
Decklists with this card

(The Universe of Tomorrow era)
Pikeman 279
And at 1 influence, every Corp can experience Ice Wall's charms. — LynxMegaCorp 30 Sep 2015
@Lynx Kuroneko - Definitely. I especially love dropping it into a Jinteki or NBN deck. — Pikeman 30 Sep 2015
4