Ever get tired of dealing with the corp's ice? Or their unique cards? Or much of anything they're doing? Want to just sit back, install a few cards, run a few servers worry-free and pull out a bunch of points? Then do I have a deck for you. 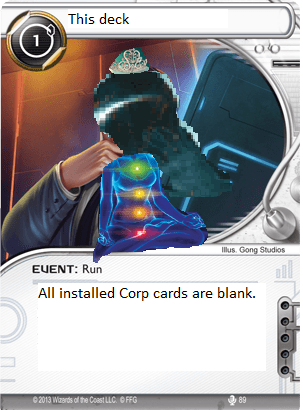 This deck builds on the back of successful False Echo + DDoS combos of the past and updates it for MWL2 and the rise of our new overlord, Princess Space Kitten.

If you haven't seen the combo, it goes something like this:

5) (Optional) use Amped Up to enjoy this access for extra clicks, Same Old Thing + AU still nets one click if you're desparate.

Some notable changes from prior versions is the addition of Nerve Agent, which adds heavy HQ pressure. This can be combined with Demolition Run to destroy their combo they've been working to build up in their hand. "Freedom Through Equality" played the turn before your big run can often mean the difference between wins and losses in this age of 2-point agendas.

Influence wise, 3x False Echo and 2x Clone Chip are essentially mandatory. I have gone from 3 to 2 clone chips to allow some teching. The D4v1d is your solution to a OAI'd Curtain Wall, which Knight has no way past. Networking keeps the tags at bay from HHN and CtM. Hades Shard is a weak addition, especially with Rumor Mill, but it allows for access to Keyhole'd cards even if there is archives ICE. All three of these can be changed to fit your local meta, trading the shard for a networking will probably be very viable in many places.