Hillary and Bill - STRONGER TOGETHER 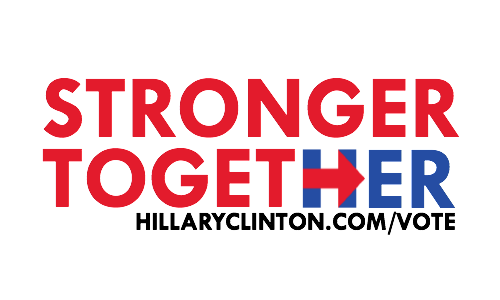 We realize that you are important voting block in the upcoming presidential election! We know that you are in a quite a bit of a Quandary on who to vote for in the upcoming Election Day. So, after serious Brainstorming, our Interns were working tirelessly until now to create a deck that we hope will help you better understand the core principles of our campaign.

WHY A CORP DECK?

Now, we know that Hillary is "running" for president, but we feel that the Corporation deck better represents what our campaign is all about. After all, those DNC server hacks have not helped our campaign at all. Luckly we are working on a secret project that will make you forget all about the email scandal, Bengazi, Wall Street speeches...

So here's why you need to play with this deck and vote for HER in November:

SHE HAS GIRL POWER:

First off, nothing says feminist like the color purple of HB! Director Haas is a strong, independent woman just like HRC, so that's why we started Eve Campaign to gather the daughters of Eve and prepare them for world domination! Mother Goddess will show us the way! Also, LGBTIQ rules! You won't find heteronormative white guys here! But if you are that guy, be a gentleman and vote for a Lady! Don't be a Bernie Bro!

SHE IS CONFIDENT AND STRONG:

Hillary is very confident that she will be the next President of the United States! That is why we included NEXT ice in this deck, but only NEXT Gold. She won't accept anything less than first place in this election! Trump can have NEXT Silver, buahahaha! Hillary was an Aggressive Secretary of State and that is not going to change while she is president! You think that just because she is a woman that she is going to be soft? Well, you are sooo wrong! Don't worry! New wars are on the way!

SHE IS WELL FUNDED:

On campaign funding, have no fear! We got that covered! We won't ask for a dime from you! Wall Street and a bunch of Hedge Funds already poured in millions of dollars! Ah all the times we went to a gorgeous Executive Retreat and ate caviar! You should have been there! And if we need more dough, George Cloney will organize another fundraiser along with other celebrities. But if you still want to contribute to the campaign, just keep paying your Student Loans every month. It will get to her eventually.

SHE IS NOT DONALD TRUMP:

We believe that a little Voter Intimidation never hurt anybody. That's why we included Hillary Trolls to help you spread the word out. And if people ask to many questions, put them on Hillary's Blacklist. We would also like to point out that Hilary Clinton actually has IQ in comparison to the Donald. Did we mention she is a woman?