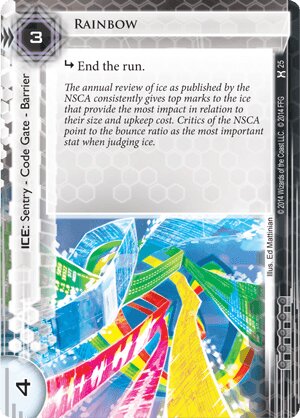 The annual review of ice as published by the NSCA consistently gives top marks to the ice that provide the most impact in relation to their size and upkeep cost. Critics of the NSCA point to the bounce ratio as the most important stat when judging ice.
Illustrated by Ed Mattinian
Decklists with this card

I believe it is time to revisit this largely ignored piece of ice in the post-rotation, revised core, banned/restricted (post Eli 1.0) era. The basic premise is a piece of ice with a good rez to strength ratio, but the drawback of not forcing a specific breaker type. As such, it will not be universally useful, but 3 rez, 4 str, end the run ice provides enough value that we should consider situations where it might be useful. Some pros and cons:

So in what sort of situation do the pros outweigh the single, major, con? The answer is when you want to build taxing servers. On its own, Rainbow is not something you should rely on to keep the runner out. But many glacier decks rely on taxing the runner and beating them with eventual economic advantage. So how does Rainbow stack up in such a deck? Pretty well actually. The reason being that it will cost 3 credits for the vast majority of commonly played breakers to break. So while the runner doesn't need to find a specific breaker to get through, none of the ones he or she is likely to use will be able to break it for less than its rez cost, which is a great feature in a piece of taxing ice. A few examples of break costs:

Cyber Cypher: 1 (pretty weak to this one)

Disposable Breakers: requires 4 collective str (probably easy to achieve in a deck that uses them)

Femme Fatale: 1 to bypass (but no one is going to Femme Rainbow)

Chameleon: Needs a str boost to break (or str reduction)

Quetzel: Okay fine, you got me. Cool hair, by the way!

All told, that is a great taxing ability against a large portion of the likely field. It fills a similar role to rotated all-star Eli 1.0: cheap, taxing ice that you could rush out behind if you're feeling frisky, but that won't stop the runner for long if they just want a single access. Ice isn't there to be a self-contained solution; it exists as part of a larger strategy. And if that strategy involves taxing the runner, then Rainbow is worth a look.

(Sovereign Sight era)
syntaxbad 624
Rainbow is reasonably taxing to break, but these numbers neglect it’s hidden weakness; because almost everything breaks it, the runner never has to find and pay to install another breaker to get past it. If all I have resized are Enigmaand Rainbow, — Netrunnerunner 21 Jan 2018
Whoops, phone posted when I didn’t want it to. If I want to keep the runner out, Enigma and Rainbow may tax less than Enigma and Vanilla, because Vanilla makes them find and install a fracter. It’s a nice taxing ICE to make a runner not want to come in repeatedly (maybe on HQ or for remote bait plays?). But you can’t rush behind it and it can’t protect R&D for high-impact runs due to its inability to gearcheck. To me, that makes it a REALLY situational card. — Netrunnerunner 21 Jan 2018
That's a very good point about how even with 2 ice, if one of them is rainbow, they still only need the single breaker. I would agree that it is not good in a gearcheck role. But I think it still compares favorably with Eli 1.0. Eli also could not keep someone out (didn't need ANY breakers) but was taxing to run repeatedly. All told, I would not slot this into every deck, but there is a reasonable portion of decks that want to layer up taxing ice, and for that, I think it does quite well (for no inf to boot). — syntaxbad 22 Jan 2018
6

As much as I would like to love Rainbow, it remains disappointing.

Theoretically, it's a 3 credits taxer against many popular breakers. It has a hard "end-the-run" subroutine so, contrary to Eli 1.0, you cannot be siphoned (or legworked, or whatever) through it without a breaker. That said, any breaker will do the job, including the ultra cheap Faerie. So, that's not a decisive advantage.

Rainbow has many annoying weaknesses:

With all these weaknesses, in many cases, Rainbow is just an inferior Eli.

Nevertheless, it's still good protecting a remote server with an asset where it has a chance to tax the Runner for 3 credits.

Lately, Rainbow has appeared as a possible protection against Forked, Spooned, and Knifed.

(Order and Chaos era)
Pyjam 517
While you make great points i must point out that eli is not the standard of ice. Everyone who is serious about this game knows that eli is far above median, probably THE best ice in the game so comparing to that this card will look inferior, but so does a lot of other ICE still good enough to be played. — GammaCodeX 26 Feb 2015
Totally right about not being able to score an agenda behind Rainbow. This is taxing ice that belongs on a central. 4tman is definitely a problem. Yogsucker breaks even on V counters if Rainbow is on a central. Cyber-Cypher might show up in an R&D lock deck, but C-C is pretty rare. I think Rainbow is pretty viable as cheap, taxing ice. — PureFlight 3 Jan 2016
2

Most breakers will spend 3 credits to break this. So for a 3-cost rez price, I say that's worth it. I don't know why it took me so long to notice this one. If you are running a deck that wants to have cheap and taxing ice and you are tight on influence, this is a great one to throw in.

Mimic and Yog.0 can easily get through Rainbow with the help of their friends Datasucker and Net-Ready Eyes.

I suppose Gingerbread, Deus X and Sharpshooter also count but they will often be accompanised by Panchatantra.

Quetzal: Free Spirit can walk right through (once per turn). Depending on the positioning Rielle "Kit" Peddler: Transhuman might be quite happy too.

With a weaknesses like this Rainbow would need some major upsides or strengths to warrant inclusion in anyone's deck.

Does it combo with anything?

Not an impressive selection in terms of combos either.

The only circumstances where Rainbow will outperform other ice is if your local meta is full of Anarchists who use AI breakers and ice destruction but don't have a lot of Mimic/Yog.0/Datasucker. If this is the case, go ahead and make them taste the Rainbow. Otherwise it's hard to have much pride in this piece of Ice.

(Democracy and Dogma era)
Zakalwe 479
This is a universal early game taxing ice. Most cases it cost 3 rez, 3 to break and ETR, only few pieces of ice can say the same. Compare it to (overpowered) Eli and you'll see it doesn't fall far behind. — chom 2 Apr 2016
More or less agree with chom. It'll always be possible to break this ICE, but at a higher taxing rate than usual for 3-credit ICE. Essentially you trade the possibility of actually keeping the Runner out for some extra tax. Which oddly makes it a piece of ICE with only hard ETR subroutines that is still porous! — LordRandomness 4 Apr 2016
If you use it on a central you'll need to have an answer to run effects/run events (Crisium Grid maybe?) On remotes it's probably best for assets since it's unreliable for protecting agendas. It's not a bad tax at str 4, just that the runner can use his or her most efficient breaker for it. — Zakalwe 4 Apr 2016