After seeing @CritHitd20s excellent "Full Restore" MirrorMorph deck on NRDB, I'd been playing around with it for a little while, trying it out at Taunton's weekly pubrunner night and one small GNK with some mild success.

I was also lucky enough to be able to pick up an extremely sweet alt ID for MirrorMorph from the legend that is @Jakuza at Worlds in Rotterdam last year, so I really wanted to use it! 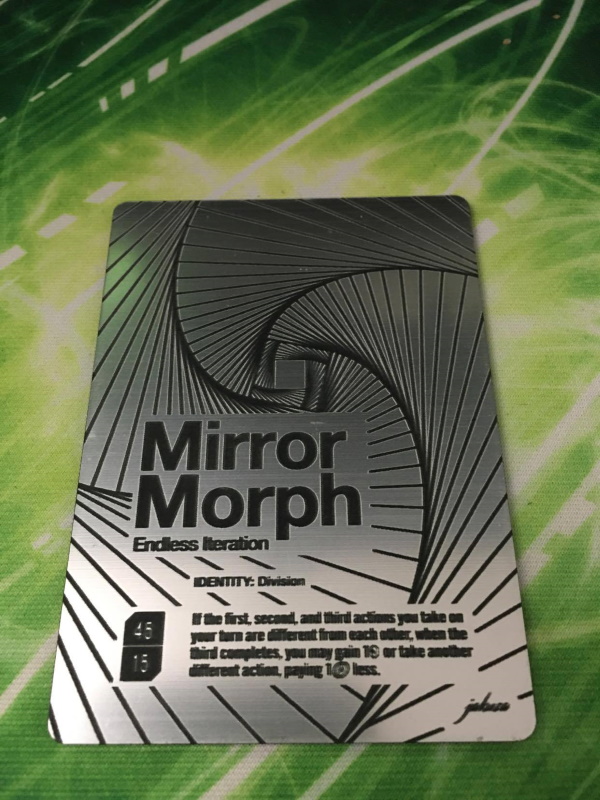 My version is largely unchanged, I just dropped the Biotic and an IPO for 2 Ash, which I now realise looking back must have been inspired by the comments on Greg deck, so even this change was not my idea, lol.

I enjoy the largely linear gameplan with this deck, which usually revolves around using MCA to FA out agendas, often with help from your ID ability or tricks like using Restore for Bass CH1R180G4 to get a fake Biotic and trigger MirrorMorph. Jinja helps keep things moving and get ICE onto your remote (or centrals if needed) clicklessley and at a massive discount, leaving you free to make sure you can score agendas when they arrive.

As described in Greg's original list, Restore is huge in this deck, allowing you to constantly pressure the Runner with MCA, bring back spent Border Controls, recover a Jinja onto a server that needs it, or any number of other great targets to keep things moving quickly and make things tough for your opponent.

On the day, this deck went 2-2, although I feel in the games it lost there were either glaring errors made by me, or some awkward draw which I was not good enough to play around, so I'm not entirely sure it was all the fault of the deck. It beat Geist and Gabe while losing to 419 and Leela - damned Criminals!

Overall, I find this a fun deck to play and it can certainly win games. When things go smoothly, it feels unstoppable, although if like me you're not a great Netrunner player, it can also allow you to make some fairly big mistakes which are very difficult to come back from, so be warned!

Shoutout to @rusefus for piquing my interest in MirrorMorph when we played in Brighton (can't remember if it was the SC or Regional) - it just took me the best part of a year to get round to trying it out.

Big thanks to Andy @Sixtyten Parsons for putting on the GNK and to everyone who came along and played!