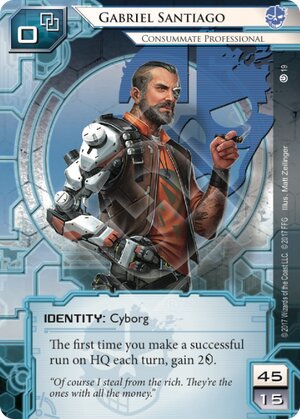 The first time you make a successful run on HQ each turn, gain 2credit.

"Of course I steal from the rich. They're the ones with all the money."
Illustrated by Matt Zeilinger
Decklists with this card

Since the card pool in the Core Set is quite small compared to where the game is now, one of the benefits is that you know (roughly) what to expect from each faction. With that in mind, I thought it'd be a nice idea to list some general things to think about, at least for when you're just starting out. As always this is very much my own opinion, so please feel to add to/correct what's here with your own points!

(Blood Money era)
Tirranek 592
I snort laughed at picking a lock with a marshmallow. Another A+ review, Tirranek. — WayneMcPain 24 Aug 2016
7

Gabe has been a runner that has seen a lot of use. He fell to the less popular side as Andromeda: Dispossessed Ristie took over during the Genesis Cycle, but he always seems to make a comeback. His ability is very useful, and focuses a lot of the runner’s attention on HQ. New players who are having trouble understanding how often to run might want to consider playing Gabe a few times; because his ability is focused on a successful run there is pressure to make those runs.

It appears at times that even experienced runners drift back to Gabe from Andromeda after a time, if just looking for something different while keeping a lot of their favorite tricks. He continues to shine, with new cards interacting wonderfully with his ability. “Sir Gabe” using Knight was very popular for a while, as you could access HQ through a single early piece of ICE for, most of the time, basically free.

In the end, he has a reliable, stable ability that continues to be useful even late game, and because of the strength of the rest of the Criminal cards, he will often be used.

(Written during the meta of The Valley/Breaker Bay, part of the SanSan Cycle. For more reviews like it, visit wyldside.blogspot.com)