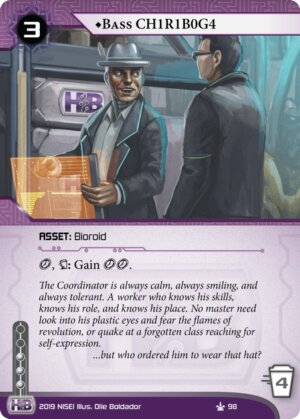 The Coordinator is always calm, always smiling, and always tolerant. A worker who knows his skills, knows his role, and knows his place. No master need look into his plastic eyes and fear the flames of revolution, or quake at a forgotten class reaching for self-expression.
...but who ordered him to wear that hat?
Illustrated by Olie Boldador
Decklists with this card

It's Biotic Labor, except it costs 1 less and the runner can trash it because it is an asset. Actually though, because you need to install this friendly bioroid before he can get to work, you are essentially spending 2 clicks... to gain 2 clicks. So the strategy is installing Bass and using him on a later turn. This makes Bass less attractive than Biotic, despite being 1 less credit.

Of course, being an asset also has a few upsides. He can be reinstalled with cards like Team Sponsorship, rezzed more cheaply with Breaker Bay Grid, searched with Tech Startup and can be used in combination with Biotic in MirrorMorph. He is a combo player's dream, and I imagine people will continue to do cool things with him. Also, he is "only" 3 influence as opposed to Biotic's 4.

So yeah, less straightforward than his operation equivalent, but also wilder.

Also comes with one of the best flavour texts in Ashes!

I'd say it's more accurate to call him Calibration Testing except purple, with a higher trash cost but no potential to go infinite. In addition to working with Breaker Bay Grid and Team Sponsorship, he also works with Tranquility Home Grid, which is one incentive to include him in a jammy deck over Biotic Labor. He's also an extremely good target for Restore and Red Level Clearance in Mirrormorph: the former turns him back into good old Biotic Labor, and the latter lets you fast advance a 4/2 with him (RLC for install Bass + free click, click Bass, install, advance with Mirrormorph action, 3 clicks left in turn).

It actually DO have the potential to go infinite, just that you need the spare click to do so. Both provides the equivalent of 1 click when used.

Does get foiled by Clot recursion tho. Unlike Calibration Testing