Is it spooky and dark outside?

Is there a pandemic raging and the world is literally on fire?

Are you 12 years old and supposed to fight a Mega Corporation?

Is your Name Nathaniel and you know that you are even better than damn good?

BOI do I have great news for ya then ... don't leave ya room and do NOT run ! Even your name "Gnat" - Going not anywhere today - indicates it ;) 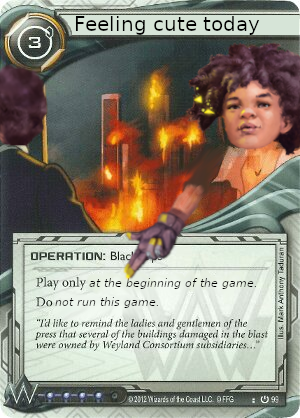 This is the deck I took to Montreal's J-Net Virtual GNK - Event #6 hosted by Andrej a.k.a The Metropole Grid.

It served me well playing 3 swiss rounds and being undefeated that day. Below is a link to the stream showing this deck in action in the final round of the tourney fighting for 1st place:

I made some slightly changes to a deck I already posted. More explanation and card decision there:

This new version was to adapt to the current meta. I cut 1 Fisk Investment Seminar for a Buffer Drive and Peace in Our Time. In test games it showed that Buffer Drive is a great help against PE decks or RP with Bio-Ethics Association. I might swap back again onto 2 Buffer drives since those can recur your Fisks midgame against decks that arent damaging you. Zer0 also benefits of having 2 Buffer Drives in your deck. But Peace is a great boost when you are stuck with low credits and since this deck has only 2 other priority cards otherwise, it isn't a huge struggle in the early/midgame.

The other major change I made is to slot a single Run Amok. Yes I know I know... the smart cookies gonna say "but Klokotze this is a RUNNING card!"

Well let me explain: in 99.9% of the games you do NOT use this card. But exactly in those 0.1% of games, so basically every third game nowadays ... the Corp tries to score out behind a single ICE. Since you are not favored in fast Match-ups where the Corp does little set up and thinks a mighty Vanilla can do it, you might aswell risk a run against Titan/Asa/SportsMetal since they usually do not have any punishment. When things go really bad you might Hail Mary the Archives to access all unseen cards you milled and hopefully win.

A special thank you to Andrej who is a real multi tasking machine. Running a tournament while commentating and being judge all at the same time was quite a challenge and well executed by him.

Also a shout out to everyone who participated in this tournament for being patient kind and friendly. The King who was the Runner-up that day encouraged me to play this type of deck.

And a big thank you to Timejammer, my friend from our local meta who created that image and playtested this deck with me.