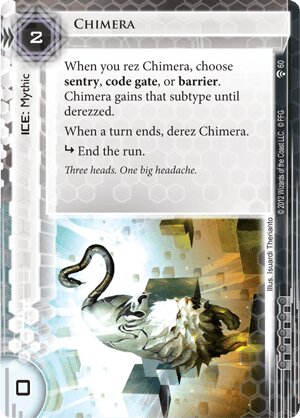 When you rez Chimera, choose sentry, code gate, or barrier. Chimera gains that subtype until derezzed.

When a turn ends, derez Chimera.

Three heads. One big headache.
Illustrated by Isuardi Therianto
Decklists with this card

My experience with this Ice is thus:

Stops the runner from entering its server unless he has an AI breaker or a full suite of breakers. Really good at slowing down Criminal decks, Stops big-rig Shaper decks cold earlygame unless they run an AI breaker, may force Anarch decks to spend their ice removal.

Usually Chimera is a super speedbump, either the runner has all of his breakers on the table or he's not getting in, but when the breakersuite is up and running it becomes more expensive for you to rezz Chimera then it is for them to break it. Often in the first rounds of a game the runner will install a killer if he is worried about damage, or a defracter if he is desperate to access what he believes to be an agenda. Chimera will stop both of them equally. Even if a runner gets all of his icebreakers into his hand early it will still cost him a few rounds to set them all up.

-Countered by AI breakers. Darwin Overmind, Alpha and Omega laught at it, Eater makes it look silly (so dont put it on R&D if you suspect youre facing an Eathole, in this matchup it is still good on HQ or remotes). Crypsis breaks it for 1 and 1, Wyrm breaks for 3, against those 2 you may rezz Chimera as a tax.

-Bad synergy in decks with lots of ice, those decks can reasonably field one of every type of ice on important servers and those ice will tax the runner more then Chimera ever could.

-Good synergy in decks that want earlygame ETR but dont want to spend card-space on multiples of cheap ice (Saves you the influence on Ice Wall if you're only including it to block access earlygame)).

-Fairly weak as the only ice on a server. The runner may run the Chimera, you choose a type for it, then he installs that type and runs again. This is mitigated by having more ice, especially if you decide to layer one Chimera after another.

-Expensive in the long run, re-rezzing it between turns can become a drain on . Spending creds is a small price to pay to immunize a server from early runner access though. Like all ice it inflates the price of installing on its server, but unlike other ice it may become useless later in the game. Nobody wants useless unrezzed ice in the middle of their server.

-Interesting interaction with combo ice like Chum. Because Chimera de-rezzes itself you can put it inbetween Chum and another ice. A brave runner with 1 or 2 breakers out might check Chum and keep going thinking he can break the next ice, only to meet with an ubreakable Chimera.

-Good with effects that remove programs, any program trash, Wendigo and Will-o'-the-Wisp combined with Chimera can make entering servers a nightmare.

Chimera is'nt perfect. It has a limited lifespan against most runners and may cost more credits to operate then you care to spend. AI breakers counter it. On the other hand, when it works it works amazing, locking out the runner from a server if only momentarily. This is one of those cards you use all the time when you get used to it, or never use at all if you cant make yourself fall in love with it the first time. Best run as a 3-of to have a reasonable chance to draw it early.

(Breaker Bay era)
tsuruki23 61
Excellent review. Although I feel like taxing use is quite limited, unless you can hold a strong economic advantage. Which at that point you should have the means to either layer an additional piece of ICE and only rez it later if it will end the run, or replace with something a bit more taxing. — mcchikinfrenzy 21 May 2015
Decent in Jinteki with an Akitaro installed behind it (remote in RP?) — LynxMegaCorp 21 May 2015
Surprised how you didn't mention that it gets wrecked by parasite. A clone chip installed makes this thing useless. With that said, it does have a place in rush decks — TonyStellato 22 May 2015
Atman at 0 is also a hard counter. But the triple Atman decks don't seem very popular recently. — Wookiee 22 May 2015
#TonyStellano. — tsuruki23 22 May 2015
Yo uare right of course, but keep in mind that if they put a parasite on a Chimera you are just usign to buy time they might be wastign a resource better spent elsewhere, so if they make such a play it might be to your advantage depending on circumstance. — tsuruki23 22 May 2015
Great review. I'd also like to point out that as the outermost Ice you could use it to eat bullets from Spooned, Forked and Knifed and protect your better Ice. Pairs ok with Mother Goddess as well. — Zakalwe 31 Mar 2016