Use Omega only on the innermost piece of ice protecting a server. 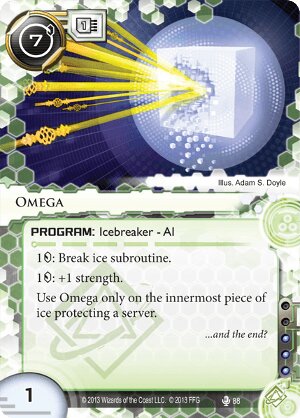 See the code behind everything: Rielle "Kit" Peddler: Transhuman transforms the first ice of every server into code-gate where decent decoders such as Gordian Blade or Torch can take on everything, then Omega can take care of the last. For deeper servers Paintbrush (at the cost of 1 time it is used) could potentially make any server protected by less than 5 layers of ice insecure! (even more if any middle ice happens to be code-gate anyway.) Escher could be used to rearrange things to suit the runner even more (move none-code gate ice to innermost layer for example to make the server more efficiently accessible in the future)

By-pass: Inside Job has quite a bit of synergy with Omega making it much more likely for the runner to actually reach that last piece of ice where Omega can do it's work. Similarly DDoS could potentially have the same effect on a server where outermost ice is unrezzed.

Install cheaply: At 7 to install such a limited AI might give pause, while Omega is most effective early game, Personal Workshop can bring the price down to potentially 0 if the runner is patient. London Library allows Omega to be installed free (temporarily) where it can then be trashed by the runner with Scavenge to cycle it on to the rig by sending it to the trash momentarily only to recur it thereafter, cost? 2 (not counting installation of London Library) net savings? 7 . (With a little less certainty Eureka! could possibly accomplish the same thing.) Alternatively Test Run with Scavenge could allow the runner to tutor for Omega first, total cost? 2s & 3

Keep server on thin ice: So long as key servers are thinly defended Omega can continue to be a reliable AI ice breaker. Forked, Knifed, Spooned & Parasite can certainly be used to remove layers of ice, additionally Forged Activation Orders, perhaps after Account Siphon or Emergency Shutdown to make the corp poor can also effectively remove yet more layers of ice.

Early game access: With Omega out early, the corp faces the difficulty of having to create 2 layers of ice on each server (possibly both layers needing End the run's) before having any meaningful measure of security.

Anti-AI: Swordsman & Turing both represent hard counters to an AI-only ice breaker strategy. Since Omega has only 1 base strength, Wraparound or any other uber-high strength ice could be rather taxing or even potentially price a runner out of a server.

Cost: At 7, Omega's cost is right up there with other heavy-hitters which given it's limited scope could make that cost a bit more difficult to swallow.

Omega is one of the least popular AI ice breakers, still perhaps in combo with Rielle "Kit" Peddler: Transhuman & Paintbrush, ice-trashing programs etc it has a viable nieche that favors aggressive play-style.

(Data and Destiny era)
chris_walker 638
You don't need several copies of the Paintbrush installed. It has a click ability and you can use it as much as you want, as long as you have enough clicks(or I misinterpret you message). Also, Inside Job can help, as it will allow you to threaten 2-ice servers by bypassing the outermost ICE and breaking innermost with Omega. — Shieldwall 20 Dec 2015
Thank's Shieldwall, both of your improvements have been implemented with my humble appreciation. — chris_walker 21 Dec 2015
Pretty much the same as Inside Job, but I think DDoS is probably worth a mention here. — forktines 22 Dec 2015
Thank's forktines, DDoS has been added too! — chris_walker 22 Dec 2015
Surfer would also work with this, especially with Paintbrush. Make the outer ice a barrier, surf it inward, and break it when it's the inmost ice. — Comfect 24 Feb 2016