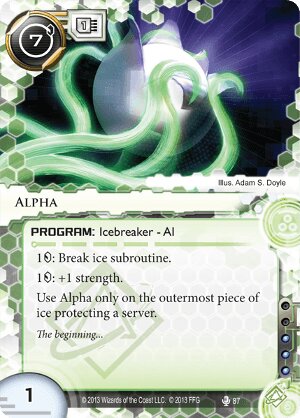 Use Alpha only on the outermost piece of ice protecting a server.

The beginning…
Illustrated by Adam S. Doyle
Decklists with this card

Face-checking ice throughout a game can keep the corp running low on and provide valuable intel to the runner about the corps defenses. Alpha is an icebreaker built for face-checking.

Insurance?: Snitch could compliment Alpha allowing the runner to face-check then decide whether to continue on to break the ice with Alpha or simply save resources and jack out instead.

Install cheaply: At 7 to install a limited AI such as Alpha might give pause, London Library allows Alpha to be installed free (temporarily) where it can then be trashed by the runner with Scavenge to cycle it on to the rig by sending it to the trash momentarily only to recur it thereafter, cost? 2 (not counting installation of London Library) net savings? 7 . (With a little less certainty Eureka! could possibly accomplish the same thing.) Alternatively Test Run with Scavenge could allow the runner to tutor for Alpha first, total cost? 2s & 3

Keep server on thin ice: So long as key servers are thinly defended Alpha can continue to be the go-to AI ice breaker. Forked, Knifed, Spooned & Parasite can certainly be used to remove layers of ice (in such cases the next ice is now the outermost ice! Alpha gets to play again!), additionally Forged Activation Orders, perhaps after Account Siphon or Emergency Shutdown to make the corp poor can also effectively remove yet more layers of ice.

Face checking: Alpha an an AI ice breaker can help mitigate the problem of getting caught with an unbreakable ice sub-type. (When accessed effects still apply) This allows the runner to pursue an ice-rezzing to tax the corp strategy perhaps or simply gain information via probing etc.

Early game access: With Alpha out early, the corp faces the difficulty of having to create 2 layers of ice on each server (possibly both layers needing End the run's) before having any meaningful measure of security.

Anti-AI: Swordsman & Turing both represent counters to Alpha otherwise low-risk face-checking strategy Wraparound also could potentially price a runner out of a server.

Cost: At 7, Alpha's cost is right up there with other heavy-hitters which given it's limited scope could make that cost a bit more difficult to swallow.

Alpha as an AI could potentially compliment a variety of decks and play styles. Every AI comes with it's trade-offs, Alpha's trade-off favors the early game and could certainly be used to full effect before the corp is able to fully defend it's servers. Still at 7 and 3 influence along with the likely hood of needing yet other AI's particularly for the late game gives many runners ample reason to look elsewhere.

(Data and Destiny era)
chris_walker 646
London Library + Scavenge takes exactly the same amount of clicks as Test Run + Scavenge. — Shieldwall 20 Dec 2015
There are 2 pieces of ice that cannot be broken by Alpha -- Swordsman and Turing. If people are already splashing these to combat Faust, it will stop Alpha and Omega too. — Goldstep 20 Dec 2015
Sheildwall, I agree with you, but does the review need to change in some way since it basically states both strategies require two clicks and that only the 3 credit cost is the difference if using Test Run? Sorry, just not seeing what needs to change, I am willing, but need more explanation. — chris_walker 20 Dec 2015
Thanks Goldstep, Swordsman and Turing have been added to the review. — chris_walker 20 Dec 2015
...only to recur it thereafter, cost? 2 (not counting installation of London Library) - Why not counting? First click - install on a Lib, second - Scavenge — Shieldwall 20 Dec 2015
Shieldwall, I qualified cost of London Library because it could potentially be used many times and thereby dilute the it's installation cost over each time it is used. — chris_walker 21 Dec 2015
When you mention using Forked/Knifed/Spooned, you don't mention that if Alpha breaks the outermost piece of ICE on a server and then Forked/Knifed/Spooned trashes it, you proceed to the next piece...which is now the outermost piece since the previous outermost piece was trashed, which means it is now breakable by Alpha. This is particularly strong against two-deep servers that have been facechecked once, or any two-deep server if you're Kit using Spooned (first ICE becomes Code Gate, guaranteed trashable by Spooned) — LordRandomness 7 Jan 2016
Thanks LordRandomness, I didn't mention it because I hadn't even considered that as a possibility! I'll update the review accordingly!! — chris_walker 8 Jan 2016
If only one piece of ice is present that means Alpha or Omega could be used to break it. — Kutpurse 16 Jun 2017