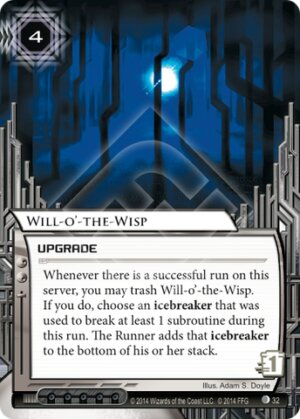 Whenever there is a successful run on this server, you may trash this upgrade. If you do, choose 1 installed icebreaker that was used to break at least 1 subroutine during this run. The Runner adds that icebreaker to the bottom of the stack.

When Will-o'-the-Wisp was first released, it did not get much attention; however I believe the evolution of the meta game and runner deckbuilding now merits it a second look.

Many runner have limited tutors, typically used to accelerate rig building alongside card draw and recursion from the heap to recover any programs lost to fairly common Corp program trashing. Will-o'-the-Wisp does not trash programs, but puts them on the bottom of the runner's stack. This means that Sacrificial Construct and Fall Guy cannot prevent the effect. Given the infrequent use of Will-o'-the-Wisp, few runners are prepared to combats its effects.

Finally, Will-o'-the-Wisp synergizes well with Ash 2X3ZB9CY, which will allow a successful run with the program-burying effects, but without the opportunity to trash. Architect and Crick allow an opportunity to rescue a trashed Will-o'-the.Wisp from archives to bury once again.

(Old Hollywood era)
bubbathegoat 596
Will-o'-the-Wisp has to be trashed in order to fire, so while it does go quite well with Ash (only access the Ash, then you can't get back in) I don't follow your point about "without the opportunity to trash". Also worth noting that although the effect of Will-o'-the-Wisp is free, it doesn't fire on access but needs to be rezzed, which is a not-incosiderable 4 credits. There are some advantages to this over an on-access cost (e.g. you can rez it in response to an incoming Account Siphon, denying the runner's money, and it'll still be active when they run it), but it's not free. — LeonardQuirm 6 Aug 2015
...unless you stick it in a server with [Breaker Bay Grid](/en/card/08040), which also makes Ash slightly better. Throw in a [Caprice Nisei](/en/card/04114) and/or [Marcus Batty](/en/card/08074) and you've got a server that no runner's likely to be seeing soon! — LeonardQuirm 6 Aug 2015
I'd like to see a more comprehensive comparison between this and traditional program destruction cards. It seems to work very well on Anarchs, who rely on drawing and recursion to get their programs back, and not very well on Criminals and Shapers who tend to run multiple program tutors. — Bigguyforyou518 10 Oct 2015
3

I keep sticking Will-o'-the-wisp into all sorts of decks, with varying amounts of success. It worked really well when Eater/Keyhole decks were everywhere because I could stick it on R&D and wait to fire it until I could actually afford it --- when the runner isn't using Eater, you have to use it the first time they make a successful run on that server because the low trash cost means they get rid of it immediately. Given that it costs 4 to rez, I've had to let runners trash them because I couldn't afford 4 credits after I had rezzed ICE on the server.

Will-o'-the-Wisp's greatest strength is against Anarchs (who currently rule the meta), who have only a handful of in-faction shuffle abilities (Djinn, Paige Piper and Trope), all of which are not commonly seen in the most popular decks. You will very likely see a Levy in Anarch decks but using it just to get a chance of returning a breaker is quite a sacrifice for Anarchs.

This is a lot less effective against both Criminals (Special Order, Hostage, Planned Assault, Express Delivery) and almost useless against Shapers (Artist Colony, Self-modifying Code, Test Run and many more).

Many Anarch decks run 2-3 copies of an AI breaker such as Eater or Faust so the corp might need up to 3 copies of Will-o'-the-Wisp to lock them out.

The timing structure of the run matters when using Wisp as well, especially with the introduction of Political Operative and Councilman with Democracy and Dogma. In step 4.2 the runner decides whether to continue the run after passing all the Ice. Then in step 4.3 paid abilities may be triggered and cards may be rezzed. Wisp only triggered upon a successful run in step 4.4, so it must remain 'survive' anything the runner can throw at it during step 4.3.

It may be worthwhile to note that Wisp is not unique, so you can use multiple copies in a server to either take out multiple breakers or to work around Pol-Op and Councilman.

If you want the effect of Wisp there are also some other cards to consider:

For four credits, you are not getting a lot of utility out of this card. Yes, if your opponent has only one copy of a certain breaker, then sending it to the bottom of his stack could be useful, but then you are still spending four credits and precious card slots on a card that does not have a big impact on the game.

Since the run has to be successful for the effect to go off, you cannot afford to put it in a server with an agenda. It is best used on the centrals or as never advance bait in a scoring server that might create a window for you to score in your next turn as your opponent searches for his lost breaker.

(Escalation era)
FightingWalloon 48
You can use it along with Ash in a scoring server. This way if the Runner prefers to ignore the trace and try again, he'll lose one of his breakers, which can be quite problematic. — Shieldwall 28 Oct 2016
And if you have it in a server with Ash, you might be playing HB, which runs Breaker Bay Grid and suddenly Will-o'-the-Wisp is complete BS. — FarCryFromHuman 28 Oct 2016
And since Will-o'-the-Wisp is not unique, it can't be turned off by the Rumor Mill and you can have a couple of them in one server, resulting in tons of frustration from the Runner, that has to dig out half of his rig from the stack. And yes, it's ridiculous if you have Breaker Bay Grid installed. — Shieldwall 30 Oct 2016
I think we will see this card more often - now that Stealth is rising in power and Rumor Mill annoy glacier builds. — Hongkong Koma 11 Nov 2016